When I first met my wife over 10 years ago, going for runs was a common way for us to get to know each other. We were both runners, although Erin shifted from strictly running into triathlons. I was still a die hard, making the most out of trails to maximize my running potential. She trained for the Wildflower Olympic distance triathlon; I trained for the Big Sur Marathon. Regardless we found ourselves running together at least once a week: talking, laughing, and falling for each other.

As the years went by we married and eventually had our daughter. Slowly things changed as the demands of our growing family combined with my injuries and her work prevented these time honored running dates from occurring. Getting back to the familiar trails of Monterey helped to put us back on the right path. Bugging her for a few weeks to take off early on a Friday to run together, she finally acquiesced on the Friday of Columbus Day weekend. Our objective: Jacks Peak Parks in the hills overlooking Monterey.

Jacks Peak Park seemed like the perfect opportunity for us: we had run it together on one of our first running dates. Now I don’t know if it was that time in our lives or that sense of blossoming love for one another, but I remember it being one of our fondest runs. On that day in 2006 we talked for a 5 mile loop through the park, our relationship still in its infancy. The miles flew by and when we were done, we sat at an overlook just down from the park, sipping a cold one and took in the city, the surroundings, and each other. It couldn’t have been more perfect. Clearly this attempt to recreate the past would bring back that same sense of bliss, right?

Sitting atop the hills above Monterey, Jacks Peak Park, according to the Monterey County website has, “Almost 8.5 miles of horseback riding and hiking trails wind through cathedral-like forests and to breathtaking ridge top vistas.” Getting off of work early, Erin met me at home and we drove over to the park together. Driving the long winding road towards the summit, it dawned on me from our past experience that it’s best to park short of the entrance as it’s a short jaunt to the trailheads. We parked next to the overlook with its striking views of Monterey below. We looked at each other with eager smiles and up the hill. Here we go again we both thought silently to each other. Three steps later we were off. 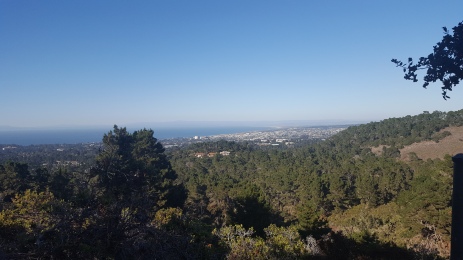 There’s a saying in the military, “No plan survives initial contact.” A quarter mile into our run we were still winding up the steep grade to the park’s entrance. Did it ever end? Finally we reached the gate and found a trail off to our left. Jumping on it we wound our way through those cathedral-like forests. One thing became painfully obvious though: somehow we’d managed to continually go uphill.

It was like the never ending climb, except that it just seemed to wind around the hills of the park. It became painfully obvious by the expression on my wife’s face: this would be anything but a blissful fun run date. Halfway into our run Erin bluntly expressed the words on my mind, “This whole #$&% run is nothing but uphill!”  I couldn’t help but laugh which of course didn’t help the situation. Trotting along we did appreciate the wide lush trails our feet landed on. The views continued to be breathtaking, and despite the incessant rises, we managed to talk a bit. I finally got Erin to break a smile somewhere towards the end of the run. Passing the four mile mark and getting “the look” from her, we turned back out of the park towards the car. The steep climb welcoming us to our adventure now became a pleasant decline to our transition area for this portion of our date. Stopping at the car, we took the view in once again and surveyed the lands below. Erin was the first to spot our next destination: Post No Bills craft beer house beaconed us from below.

Wasting no time we drove down the mountain and to Post No Bills. If you haven’t been yet, I recommend Post No Bills to anyone who appreciates a great selection of beer whether from tap or in a bottle. With nearly rotating 20 beers on tap, and countless more available in refrigerators adorning the far wall, it’s hard not to find something to like. Whether coming in to watch sports, meet a friend, or conduct post-run hydration activities, you’ll find Post No Bills welcoming and enjoyable.

Erin and I had both been there before, but not together, so this made it even more special. And while they don’t serve food, usually a food truck sets up outside to serve you or you can bring your own food in.

Having so many beers to choose from, I went for my favorite carb reloading brew off the tap list: the Kulmbacher Kapuziner Hefeweizen. With its low bitterness and rich nearly fruity flavor, it was perfect for a warm fall afternoon. Erin opted for the Commons Urban Farmhouse Ale, being lately on a saison & farmhouse ale kick. Both beers hitting perfect notes of satisfaction and helping us to relax after the challenging run we’d just conquered. At this point the conversation flowed between us as the week and the run stood behind us and a long weekend lay ahead.

As our time drew to a close (our daughter eagerly awaited liberation from day care), we agreed to go full autumn and chose the draft seasonal, Cascade’s Pumpkin Smash Sour, which like the name implied was a healthy taste of sour & pumpkin in the theme of “How can we overkill the pumpkin just one more time?” It wasn’t a bad beer though, and we certainly didn’t let it go to waste.

Our beers finished, Erin and I went to pick up Isabel and start the weekend. Despite overcoming the geographic challenges of Jacks Peak Park, we’d found our stride cresting the peak and finally gotten to our happy place on that running date afternoon. I’m sure we’ll do it again soon, although I think I’ll have to promise her somewhere relatively flat next to entice her. Free beer at the end usually works too.