With its multitude of golf courses and lavish homes, Pebble Beach might appear to be the last place you’d find a great trail to run, but yet, there they are. All one has to do is look and do a little exploring. That was exactly the kind of mood my wife and I were in the day before Thanksgiving: exploration, questing for beauty, and getting outside (and maybe drinking a few beers).

We started our trek this time at Asilomar State Beach bordering the northern entrance of Pebble Beach, and just inside of Pacific Grove. We parked along the road at Asilomar and found the trailhead tucked between a grove of trees. Initially the trail lures you in with its packed dirt as it winds around and up to the beach where the path hastily transitions to a combination of deep loose white sand and a wooden planks. The sand definitely got our legs loose as it thickens in spots.

Once we hit the pathway, however, the terrain shifted to more of a slight rolling feel with its packed dirt and single track as we bounced our way into Pebble Beach with the Spanish Bay Golf Course on one side, and the ocean beckoning on the other.

Entering Pebble Beach, we jumped on a small trail paralleling 17 Mile Drive, the iconic and scenic road for most tourists passing through. And while I’m not sure if this trail has a name, it’s probably appropriate to simply call it, “17 Mile Trail” (originality isn’t always my strong suit). The trail is flat, winding, and simple; it leads you past several iconic stops along the Drive such as China Rocks and Point Joe.

If you’re looking for solitude and an absence of traffic, I recommend going early in the morning before the crowds of tourists descend along this epic route. And while we only went for a quick out and back for a total of 5 miles, adventuring out further will take you out past the “Lone Cypress” perhaps one of the greatest landmarks on the Monterey Peninsula. Be careful though as you run further along this path, eventually the trails end, and you’ll be running on the shoulder of 17 Mile Drive. On this portion of the trail, however, this peaceful path presents the runner with a calming interlude between sand and sea. 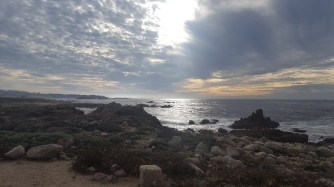 Like I mentioned, the first part of the course is thick, deep sand providing a real gut check on our return leg.

By the time we finished the run, our legs really felt it from this final stretch. We clearly needed a reward. My mind was already made up: Fieldswork tap room in Monterey. A short drive later, and we walked into Fieldwork tap room to celebrate our run and pre-game our Thanksgiving weekend. Unlike a lot of tap rooms you visit, the Fieldwork Monterey tap room is simple and no fuss. Completely outdoors with a shipping crate serving as the bar, you might not realize what it is driving by. Fieldwork sits comfortably astride a Peet’s Coffee and across from Trader Joes downtown. The day we arrived they had 18 of their  beers on tap. We opted for a sampler of six…well six and then we found out about their Common Good, and went for a seventh.

Fieldwork offers something for everyone in their abundant beer selection. Looking at the menu, we figured that a sampler definitely was the way to go—too many beers looked appealing. Of course names like “Lil Pulp” and “Hugo” also drew us in. Here is a brief rundown of selections:

Lil pulp: This probably was the least IPA of IPAs I’ve ever had. Tasty, with fruity hints, not overly hoppy, this Lil Pulp gave us a big surprise in terms of its taste. For not really being IPA fans, this might have won us over. And at 5% abv it could almost qualify as a porch beer in my book.

Old love: This beer, their Bohemian Lager, demonstrated a light, crisp, bitter tones, but not overpowering. It reminds you of your beer selections from yesteryear before discovering the power of double and triple IPAs. It could definitely pass for a day drinking beer.

Hors de Saison: This holiday farmhouse ale really packed a sour punch to it. Dark and warm but with bitter hints, this beer was almost too rough for a saison. It being the holiday season and all, it reminded me of that politically incorrect relative that you only see during the holidays: good for a couple of laughs, but then things get awkward and you move on. Still though, you’re glad you saw them and we were happy to experience this ale.

Vincent: I like Belgian ales—some of my favorite beers are Belgians, so naturally I have high standards in this arena. Vincent came up in the middle of that pack: it’s unique with all of the classic tastes of many Belgian ales such as caramel and cocoa hints, and a deep almost smoky flavor. Definitely worth a try!

Rain Street: A neat clean clear taste, perfect for that warm summer day after weeks of fog and rain (hence the name ‘English Summer Ale’). The beer breaks from the fog and depth of other English ales such as IPAs and heavier bitters, and comes up very well on its own.

Hugo: Who better than a French-style table beer to remind you that it’s ok to have beer with lunch?  That’s what you get with the Hugo: a flavorful, light, and probably healthy on some level drink that’s still light enough to pair nicely with that Caesar salad or Southwest-style hamburger and the sweet potato fries you ordered for lunch—and still make it back in one piece for that 2pm office meeting.

At this point in our sampling, we felt pretty good, and then Good Conduct happened. The beer sat outside of the 6 glass basket we’d purchased at the bar. We’d hardly paid any attention to it, opting instead to focus on the others. And then this maple imperial brown ale warranted our full attention. We drew it to our nose and at once its dark forbidding color drew us in, combined with the deep and powerful bourbon smell. One sip did it all: an explosion of flavor in one’s mouth: chocolate, maple, and other sweet overtones. Like the imperial name implies, it commands attention and respect at 12%abv…you will be wowed on the first sip. We didn’t hesitate and bought two cans of it for Thanksgiving.

With that, we headed home—our run and our beers behind us and the holidays just a step away. We felt good: we’d gotten our run in on a beautiful fall day along some of the prettiest coastline in the world and paired it off with beers just as formidable. I can’t wait to do it again soon. 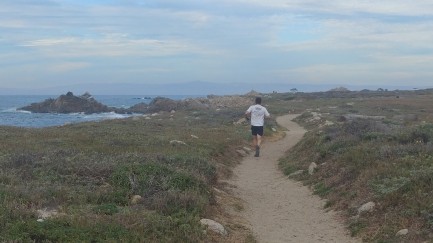