At the base of the German Alps in southern Bavaria, sits the picturesque town of Garmisch-Partenkirchen. It is the quintessential Bavarian town: with its towering peaks, pristine ski & snowboarding runs, and iconic Bavarian homes, Garmisch-Partenkirchen stands out as the core of German’s Bavaria. One cannot go wrong visiting this city at any time of the year: summer for it’s beautiful hiking trails up into the mountains, winters for the snow & skiing. Garmisch-Partenkirchen is actually two towns split by the Partnach river flowing down from the mountains. Most people simply refer to the town as Garmisch. When the chance to go and visit for a planning conference arose, I couldn’t miss the opportunity. 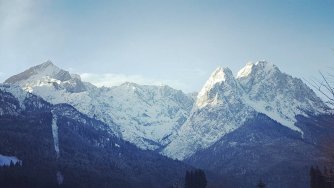 Besides all of the beauty of Bavaria, Garmisch is special to me for another reason: I lived there. As a boy, the Army stationed my father and our family at Garmisch for two wonderful years. It was here that I first learned to ski, traveled Europe, and learned to appreciate the perils of the Cold War—all before I turned eight. Having been a nomad most of my life, Garmisch holds a special place in my heart, having changed little in the 35 years since I left.

Even before arriving I jotted down my to do list: drink good beer, eat great food, drink better beer, eat more food, drink gluhwein, and of course trail run. I looked at maps, made mental notes of the place to run, and checked the forecasts—the big question being: how much snow was there? Coming from sunny and warm California I dug out my winter running gear, I couldn’t wait to hit the trails! This was going to be fun!

Arriving into Garmisch on a Saturday afternoon, it was everything you’d expect in a Bavarian village in winter: snow covered rooftops and hills, while flurries danced around you. My colleague and I checked into our hotel and headed back downtown to walk the pedestrian zone of shops, restaurants, bars, and cafes. 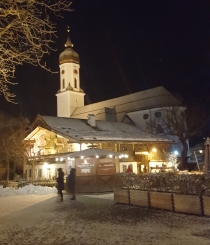 Before long we found my initial goals: a booth selling German mulled hot wine, known as gluhwein, and a good German restaurant or gasthaus, offering the usual varieties of German food and beer. Without hesitating I ordered the house beer: Hacker-Pschorr hefeweizen—ready for the familiar flavor to welcome me back.

By Monday I was ready for a good run. After our day of planning & seminars, I headed out from the area known as Sheridan Kaserne into the snow covered fields to the south. The snow was either packed powder or just ice in many places. My trail was more of the indention of tractor tires in the snow often paralleling more groomed cross country ski trails the city maintains. These trails are off limits to hikers and runners, so I opted instead to take my chances running existing walkways and tire tracks. The sun shone brightly in the valley, making the snow’s reflection almost blinding. Like a bug to the light, however, I couldn’t stop. I trekked on enjoying every minute of it.

For my feet I chose my Inov-8 Roclite 315s: a sturdy lightweight trail running shoe perfect for most conditions. While the shoe’s sturdy rubber soles and cleats are fantastic for snow running, I went the extra distance and brought rubberized cleat attachments for the ice. Easy to pop on and off as well as lightweight, these small spikes were perfect for the ice I encountered. And while the route I chose was nearly all flat, the constant crunching of snow made the run more challenging than one would expect. I ended up running about 4 miles, loving every moment of it. It was the best way to be welcomed back to this special place.

To accompany this run, I paired it with a more great beer & food.

This being Germany, I continued my fondness for hefeweizens. Heading to another local German restaurant in the neighboring village of Grainau, I feasted on a delicious plate of schnitzel and pomme fritz, or a breaded pork cutlet and French fries. For me this is my favorite German meal: while some would say that a hefeweizen alone is a meal, the pairing of these three: the hefe, the schnitzel, and fries, are exactly what you need to round out your day especially after a good run in winter. Again I went with the house hefe: Paulaner hefeweizen this time—and again I was in heaven.

After the first three days of being here, I’d met most of my goals and was enjoying the fruits of my labor. This wasn’t the end however, just the beginning: I still had four more days of running, drinking, and eating to do here in Garmisch.