On the morning of my last day in Garmisch, I headed out for one more run. The sun shone through brightly after two days of overcast and a moderate snowfall. The air stood crisp and clear in the February light. I headed up alone this time into the mountains to press myself once again on these trails and enjoy the peace and solitude that running affords. On my mind, however, I replayed the events of the previous night and couldn’t help but feeling that once again this city, this land, put another piece of my life to rest. 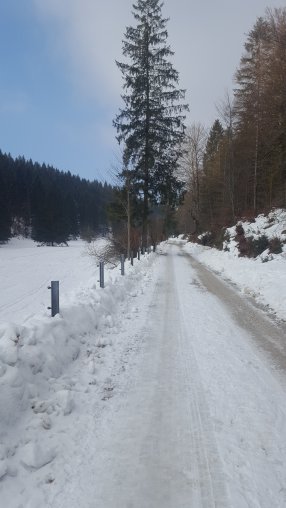 The night before in my hotel while the rest of my immediate colleagues went to bed to catch early morning flights out of Munich, I wandered into a common area where a couple of nights previously we gathered to sample a medley of beers and wines while conversing about our travels and discoveries here in Garmisch. On that evening on the far side of the room several Eastern Europeans played pool conversing in a harsh language. I hadn’t paid their tongue too much attention being wrapped up in Südtirol Chardonnays. Now on this night before my own departure, I decided to make my way back to the common area and learn more about these other guests and hear their story. Fortunately, the group playing pool this evening was the same as before and they recognized me. Before long we were in conversation. They were here for a Seminar for Regional Security hosted by the George C. Marshall Center and came from all over Eastern Europe. What hit me though was when I realized what language they spoke, and where they came from. The group I met with all came from the Balkans: Bosnia, Croatia, Serbia, Montenegro, and Slovenia. They spoke Serbo-Croatian to one another, all the while playing pool in Germany. I could not have been happier. At that moment playing pool with that group, I felt a sense of vindication with much of my life.

It has been nearly 15 years since I left the Balkans. In my early years, I spent two tours of duty in the Balkans as a peacekeeper following the wars which dissolved the former Yugoslavia. Before larger conflicts in Iraq and Afghanistan, these missions taught many in the military such as myself that populations, not Armies played a key role in the success or failure of your mission. 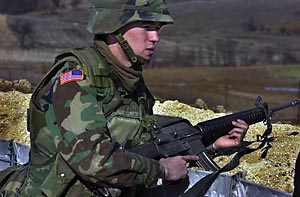 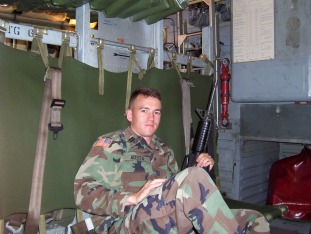 You could say we cut our teeth in places such as Tuzla, Brcko, and Gnjilane. Following the conflicts the scars of hate ran deep in the various ethnic groups. Many of us felt that the best we could do was keep them apart until we left, and then let it all dissolve again. While we hoped this wouldn’t be the case, it never was far from our minds. In 2004 the North Atlantic Treaty Organization’s Stabilization Force (SFOR) mission ended in Bosnia, while its Kosovo Forces (KFOR) mission continues even today. Around that pool table that night one thing was certain: these people had not turned against each other again, a sense of peace existed. Over the course of 15 years since I left, they had not become polarized, but discovered each other and determined not to repeat the painful mistakes of the past. And while I’m sure there are still some scars, talking to this group it became apparent they looked past history and into a new future of hope and prosperity. I talked to each of them while I clumsily played pool (what can I say, I’m a runner & cyclist), hearing their stories, and learning about them. I shared my own experiences in their some of their countries and the work I did to help foster lasting peace. I went to bed that night feeling a deep sense of vindication for our hard work so long ago in these far off corners of the world. I could not have been happier.

It was with these thoughts I followed the snow covered trails up towards the Alps. The trail went from paved roads to a slush to solid snow. I rose up through the hills through cow pastures winding around the edges of the Loisach river. 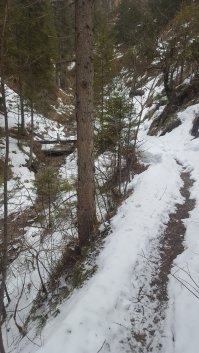 After taking a turn at a trail crossing nearly two miles out, I quickly saw my trail deteriorate to more of a goat path along the side of a steep hill. Finally, just shy of two miles the trail ceased in my mind and I knew it was my time to turn around. Taking a slightly different path back, I trotted along hoping to get at least get 4 miles in but make sure I ended more or less where I began.

Like all the trails I ran in Garmisch, these were no different: wide, marked, and luring you further with each step. In a short while I would head north to Munich and take my plane back home, but for now I finished contented for all the gifts this city bestowed upon me once again.

To complement this sense of accomplishment and vindication I checked into the airport and made my way to the Lufthansa Business Lounge at the Munich airport. Now with a 10+ hour flight ahead of me, I couldn’t resist the opportunity to kick back, reflect, write, and have a beer or two. I was in luck: the Lufthansa Lounge had free beer. You’ve heard of bottomless mimosas at brunch? Well think of this as bottomless hefeweizens. I couldn’t resist. And while I didn’t overdo it, free weizens were the perfect end to a wonderful trip. My mind full of thoughts of trails, interesting people, and glimpses into my own past; I would fly back home fulfilled and complete and ready for the next trail and beer that came my way.