So Day 4…started off with this odd tapping sound. Immediately I thought my 4 year old was tapping my head with her favorite dinosaur, but then realized she’d also be screaming if that were the case. Then hit me—is that rain? Now work with me here—it hasn’t rained in Monterey CA since May so I’m a little rusty at the sound. I got up and found everyone still asleep. Small victories!
After getting up I ran through the usual morning rituals for the day: coffee pot, dog walk, and eventually a great trail run. The runs up here at Fort Tuthill just outside of Flagstaff have been phenomenal! Only problem with this one—I seem to have pulled a muscle in my calf. I still crushed 3.5 miles. Such is life. 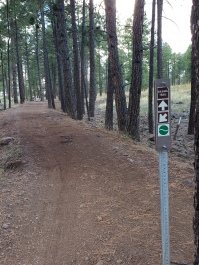 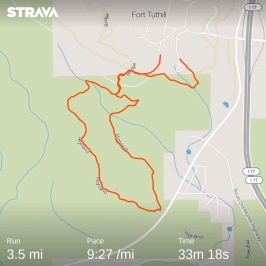 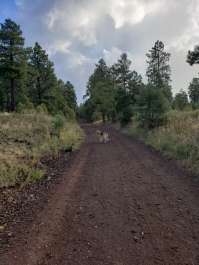 Not much else on the agenda: drive to Albuquerque and stop at the Meteor Crater in Winslow AZ (yes that Winslow, Arizona Eagles’ fans!). Let me jump to the point here at the Meteor Crater…my dog managed to get kicked out of the Puppy Ramada for being too aggressive (she’s kind of antisocial) and high wind gusts of 60mph + limited viewing of the crater. 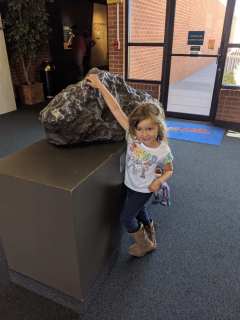 Nothing to do but pack up and head east, but not before seeing the another life or death pet area at a rest stop.

The rest of the day was pretty dull, except for the great philosophical talks with the 4 year old. Below are a few of the subjects:
1. Her graphical depiction of how a meteor destroyed the dinosaurs
2. When clouds stick to the ground it makes lightning.
3. How a tyrannosaurus rex really killed Scar from the Lion King
4. Dinosaurs actually got married
5. At the end of the rainbow you can find things to fix your tablet…and unicorn…and leprechauns.
6. After the dinosaurs died, some still lived and the T-rex killed them. He should say sorry. This happened 100 years ago.
7. Dinosaurs sometimes ate cookies. They’re favorite was vanilla and sometimes they put whip cream on top. Some ate grass except for the titanoboa which ate eggs but wasn’t a dinosaur but a prehistoric snake.
8. Did you know that with Lightning McQueen (in Cars) there were dinosaurs?
9. Did you know Africa is a far away country? 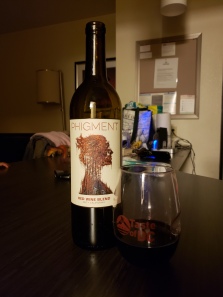 We got in late and celebrated with a glass of wine. A nice red blend, very robust and flavorful…and which my dog then spilled a glass all over the hotel room couch. Fortunately, as we discovered, the couch was stain resistant. Winning!

And of course the rollup:
Total distance: 330 miles
Total time: 8 hours
Pit stops: 4
Infant meltdowns: 3
Toddler meltdowns: 1 (she talked dinosaurs the entire day!)
# of times the Lion King soundtrack played: 6 (there would have been more except I offered to do a sing-a-long…pretty much put an end to that) 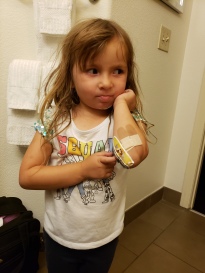 # of McDonald’s French fries consumed: about 57 across the family. (Work with me here, there aren’t a lot of healthy options in Grants, New Mexico for dinner)
# of band aids required by my 4 year old to cover her quarter inch scratch: 7
# of bottles of wine consumed: 1
# of full glasses of wine spilled onto hotel couches: 1 (there may have been a temper tantrum by an adult after that)
# of times I nearly lost my sanity: 1 (did I mention I have a toddler who hates her car seat?) 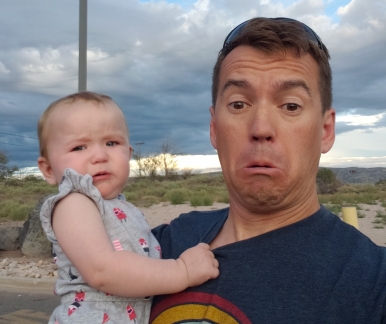 Losing our sanity together

Just as an aside, we did not lose a single french fry during our McDonalds dinner stop. Not one. I learned. And yes, I understand eating french fries constantly doesn’t make me a vegetarian, and will probably kill me in the long run. But they’re just soooooo tasty!

Next stop: Elk City, Oklahoma. Getting closer! Tomorrow I’ll discuss the ways in which I keep the infant calm despite hating her car seat! 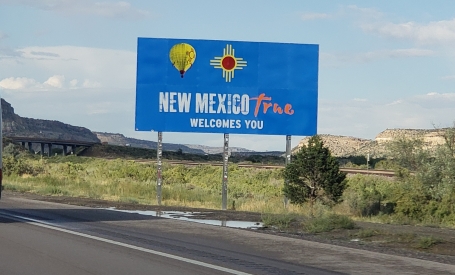