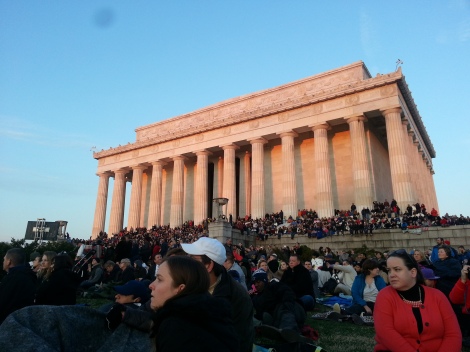 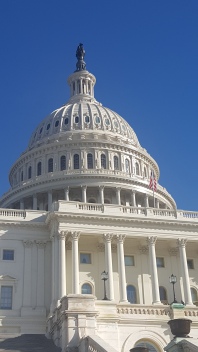 Without a doubt Washington DC is one of the most scenic, beautiful, and alluring cities in the country. With its iconic landmarks and monuments, the Potomac River running along its western shore, and the quaint neighborhoods sprinkled throughout, Washington DC is a melting pot of culture, beauty, and history. Beyond the beauty of the city, however, exists a world teeming with secrets, deception, and intrigue. This is my story of two of such secrets inside our Nation’s capital: Greenbelt Park and Hellbender Brewing Company. Now I know what you’re thinking—“Wait– how are a park and a brewery a secret in a city full of spies, lies, and conspiracies?” That’s just it: they’re right there in the open, and yet few people realize the how great they are.

I was back in Washington DC on a business trip and had a weekend to kill so why not get in an afternoon of trail running and beer tasting? I lived in Washington DC for nearly 5 years and was intimately familiar with the labyrinth of small neighborhoods, bars, and trails existing throughout the city. When I arrived in 2010 the city was undergoing a renaissance as neighborhoods once dilapidated from the 1968 riots, marched forward towards urban renewal. Developers descended on the city in droves, quickly flipping homes, and selling them for profit. I should know, I bought one in the up and coming neighborhood of Brookland on the doorsteps of Catholic University. Being an avid trail runner I read up on places to run. The obvious ones always came up: the National Mall, Rock Creek Park, The C & O Canal Path, and the Mount Vernon Trail in Virginia. They were all great to run on, but lacked something. 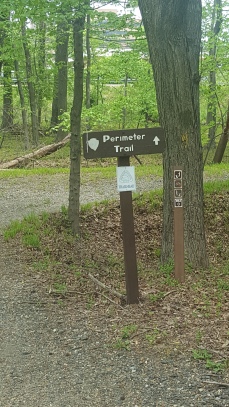 Then one day I found it: scouting an area map of the greater DC area in my car (back when people didn’t just use their phone), I found a large patch of green at the intersection of I-495, known as the “Beltway” and Maryland 295, known as the Baltimore Washington Parkway. It was labeled simply “Greenbelt Park.” I got online looked it up: there right under my nose and a mere 15 minutes up the road sat a trail running oasis! Jumping on the website I found this hidden gem boasted a 5.3 mile perimeter trail set in the woods on the city’s fringe. One visit, a run around the park, and I was hooked. It became my trail of choice over the next 4 years to run with my wife or our first dog, Ginger, and second dog, Kit. It was a natural choice to return to on this visit.

I drove north to the edge the Beltway and found my way to Greenbelt Park. While it had been nearly three years since I last ran this trail, everything was right where I left it. While there are several parking lots at Greenbelt Park, I chose the Sweetgum Picnic Parking area to embark from; there are usually families picnicking here or playing in the fields and playground. From the parking lot it’s about 100m down the road and you can jump onto the Perimeter trail. It was exactly as I left it: beautiful single track well marked, and ready for my footsteps. The spring foliage was in full effect: thick full leaves and branched canopied covered much of the packed dirt trail. The trail is marked every 0.2 mi for most of the route. If 5.3 miles is too much, there are a few break off points along it which can take you back to various parking lots around the park. If you want to go further, you can add a few trails to the conclusion of the Perimeter trail relatively easily. For this day though I was satisfied taking my favorite lap around this beautiful place one simple time. 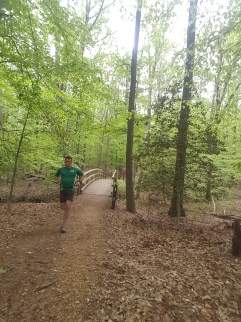 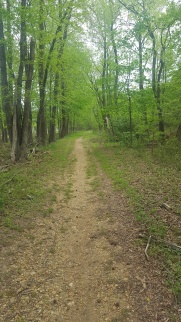 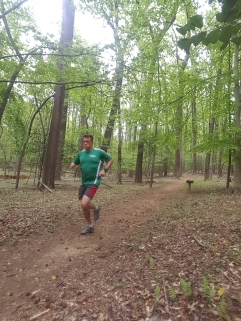 Since it is a secret you don’t often come across too many people on the trails, and if you do, you almost often find someone to offering a friendly greeting. While I tracked my mileage on this day, I could care less by my time. I took it all in, taking lots of pictures and enjoying the moment. In this city of secrets, Greenbelt Park stands out as a true gem in this beautiful city. Like all good things though this run came to an end. And as I laid there in the grass stretching, I couldn’t help but smile as I readied myself for my next secret: Hellbender Brewing Company. 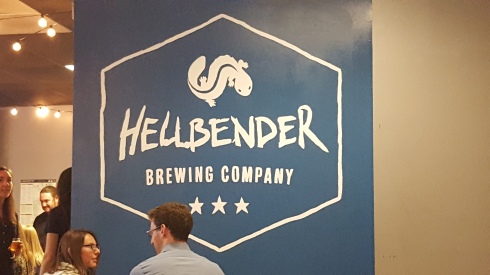 Washington DC may be known for a lot of things, but beer isn’t one of them. I stumbled upon the emerging DC beer scene in the summer of 2011 by accident doing of all things, visiting the post office. One Saturday morning I went to pick up a package at the local post office at a strip mall. Sitting in my car, I looked up to see on the sign advertising the strip mall’s occupants: the post office, a nail salon, and DC Brau. Wait—DC Brau? Now I’ve only lived in Germany 4 times in my life, but that sounds a lot like a brewery. I drove around the strip mall to the backside and there hidden stood the brewery, with rays of sunlight shining down through an otherwise gray cloudy day to illuminate this hidden gem. Unfortunately it was 10 am and the brewery wasn’t opened, so I went home and quickly looked up DC Brau as well as other breweries in the city. Turned out there was one even closer called Chocolate City Brewing. In time, others stood up all within a couple of miles of my house including Atlas, 3 Stars, and Right Proper. Suddenly DC experienced a beer revolution as these and other nano- and micro-breweries emerged onto the scene. At the time most of these breweries only offered tasting on Saturday afternoons and the option to buy a growler of beer. In time some, such as Chocolate City, closed down, while others like DC Brau and Atlas grew in size and scope. The beer laws changed—these breweries now can sell pints and be opened multiple days out of the week. You could even take guided tours of several breweries through groups like City Brew Tours. DC beer matured. Of all these breweries one stood out as a favorite to me: Hellbender Brewing Company; so naturally it was my choice to visit on this journey. 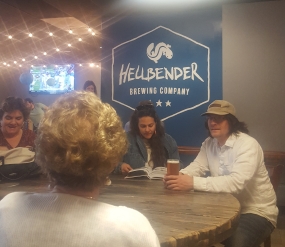 I left Greenbelt Park and drove to a small industrial area nestled in between neighborhoods of the northern tip of the city to get to Hellbender. It was a typical Saturday afternoon in early May: warm & humid, a food truck parked out front, and great beers on tap. Hellbender is a very family friendly establishment as most of the breweries are with areas for kids to run around and often TVs and games laid out. 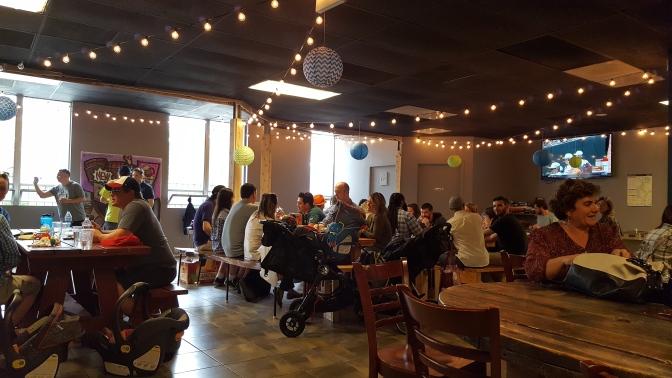 I entered, made my way to the bar, reviewed their selection and ordered the requisite sampler of four beers. I chose their Bare Bones Kolsch, Southern Torrent Saison, Sunbreaker Hefeweizen, and their Ignite India Pale Ale. 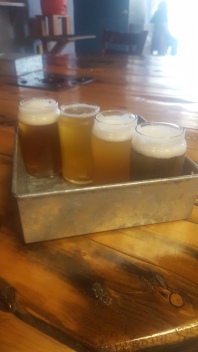 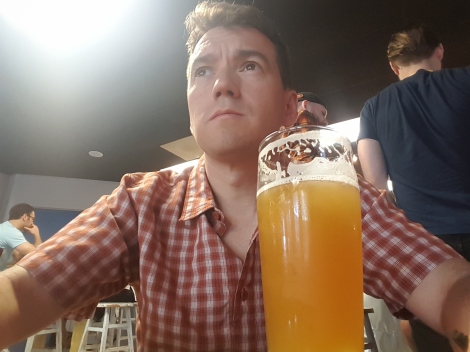 They were all incredible full flavored beers with heart. I wasn’t disappointed despite it being 3 years since I last had their beer. I enjoyed them so much I ended up having a pint of the Sunbreaker—a perfect pairing after the long run and with summer hanging in the air. At that moment, with the Capitals playing in the background—on their way to their first NHL championship– I couldn’t have been happier.

DC is so full of secrets you could spent your life there exploring them and not come close to finding them all. I know of two such secrets, Greenbelt Park and Hellbender Brewing Company, and am grateful to experience them both and now sharing them. If you get the chance and can go, I recommend both, or seek out and find your own path & pilsner next time you visit our nation’s Capital. Cheers! 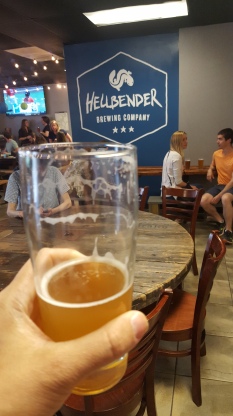