Monterey and the Central Coast are notorious for fog and gloomy conditions throughout portions of the year, so much so that many locals will speak of the early summer as “June gloom” when the warm inland air meets the cool wet marine layer caused by the cold waters of the nearby Monterey trench off the coast. 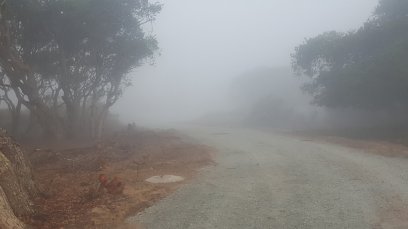 While the rest of the country bakes in hot and muggy temperatures, Monterey and its coastal communities maintain mild temperatures in the 50s and 60s. With this in mind, there are mornings when you wake up during the early summer and the skies are clear, the sun shining, and you have absolutely nothing planned, except to enjoy the outside. This is my story of one such Saturday along the central California coast.

Having traveled much of May and June, I was glad to be home. My to do list around the house combined with my deep desire to be with my family wore on me by the end of my travels. It was good to be home. We made no plans but talked a lot of things to do or wanted to do: local sightseeing, fruit picking, wineries and breweries to sample. Unfortunately the fog and work seemed to intervene and life took a toll. We just needed a catalyst to get us back on track. The morning of June 23rd was that catalyst. I woke up early, around 6 am expecting to see the usual enveloping fog blanketing our home in Seaside. To my astonishment, a deep clear inviting blue skies shone. The sun was already up tempting me to come and play. I took my dog, Kit, for a quick walk. At the top of my street I looked out and could see clearly in all directions. I felt like a kid in a candy shop with an abundance of optimism! I couldn’t wait to get on my road bike and explore. It wasn’t even 8am yet.

For some time I wanted to venture north on my rides and explore the fields north of Marina, south of Watsonville, and west of Salinas. On my map the roads looked viable; I explored several in the past but I would checking out some uncharted territory near Castroville in the middle. Shortly after 8 I rode down my driveway and headed out. First I jumped on the Monterey Bay Coastal Recreation Trail and headed north towards Castroville. This path is a road cyclist’s dream outside of Monterey: rarely crowded and well kept. Just north of Marina I opted for the wide shoulders of Del Monte Boulevard, before turning onto Monte Road and north across the Salinas River. Once across Nashua road I discovered a new bike trail recently completed outside of Castroville leading me into the town. While still early, the village known as the Artichoke Capital of the World, was alive and buzzing. I rode out of town to the east passing through vibrant strawberry fields being tended to. 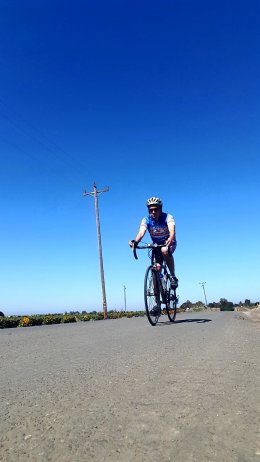 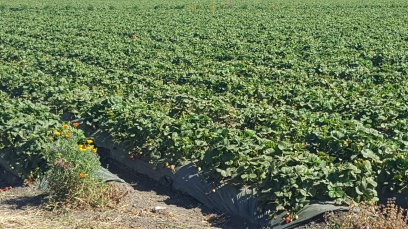 The strawberries were in season and their sweet aroma filled the air. I could nearly taste this summer delight as I rode. I pressed on only stopping to observe the endless fields of this delicious fruit. Eventually I linked back up with Reservation Road and from their Imjin Parkway back towards the California State University, Monterey Bay campus and onto my home. It was a ride of nearly 40 miles over a few beautiful morning hours before either the heat of the day or the fog of the sea could overtake me. I didn’t think the day could get much better, but it did.

Arriving home, I told my wife my adventures in strawberry country. We realized that it was time to take our three year old to pick some. A few minutes on the internet and we had a day planned: lunch first in Marina, followed by strawberry picking, and then a brewery visit in Watsonville. Could it get any better? For lunch we chose to eat at the Mecca Deli in Marina, a German-style deli and store sitting quietly in a strip mall off Reservation Road. Their authentic menu combined with a variety of German sundries was nothing less than incredible. I ordered my go to German meal—a currywurst and French fries to see how it measured up. Now currywurst is pretty easy—it’s literally cooked bratwurst smothered in curry ketchup or a curry sauce. And French fries, well, proper German ones tend to be rigid and straight—you won’t find flimsy or limp “pomme frites” in Deutschland. The Mecca Deli measured up, and my currywurst was on par with many I have had in Germany over the years. We even managed to get my daughter to try a couple of wurst, so we judged the meal a success. Stomachs full, it was time to venture north to find our strawberries.

The next stop on our adventure was Gizdich Farm on the outskirts of Watsonville. We quickly realized that we weren’t the only ones with this idea. Nevertheless, my three year old, dressed as a Disney princess took her basket and ventured out among the rows of strawberries to pick her share. 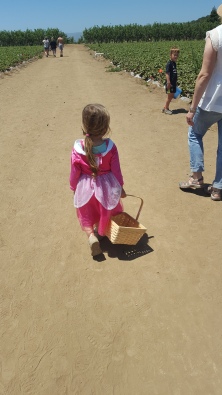 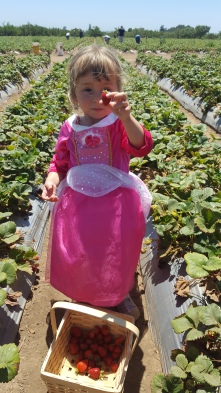 The air wasn’t oppressively hot, and the sky stood blue above. We went through the various stages of fruit picking with a 3 year old: 1) ripping off the fruit and some of the vine, 2) gently picking small fruits because they look cute, and 3) just holding the basket while mommy and daddy picked them. In the end she didn’t complain or throw any tantrums, and we walked away with four pounds of delicious ripe sweet strawberries, two pounds of which now sit in the freezer. By the time we loaded back into the car it wasn’t even 3 pm yet, and the brewery beckoned. 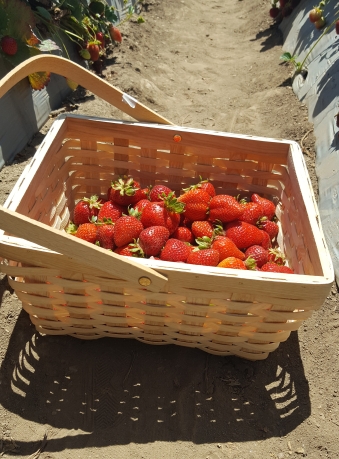 The irony about the Elkhorn Slough Brewing Company is that it really isn’t near Elkhorn Slough. Located in Watsonville and in business since 2016, this brewery lives up to its motto of “May the funk be with you.” This quaint brewery located just down from Watsonville Airport is a fun mix of brewery and gathering space in a converted warehouse in a business park. Even with our daughter it was a warm and welcoming atmosphere (we bribed her a bit with YouTube videos), allowing my wife and I to enjoy a 6 beer sampler consisting of their:

Pajaro Gold: a Czech-style pilsner with a west coast twist

Curse of the Kumquat: an American-style wheat beer, with subtle fruit hints

Mothership: a mashed barrel-aged wild ale, with a funky and tart taste 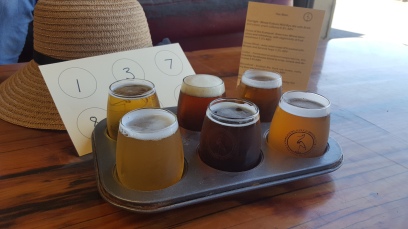 None of the beers disappointed. After a day in the sun, they all managed to bring to life this funky little brewery and keep the energy of the day alive. Our excitement still up, we started to drive back towards Monterey, when at the last minute opted instead to stop and explore Moss Landing State Beach.

Perhaps the best part of the day was how well my three year old had been. She’d loved the German food, been enamored picking strawberries, and even entertained herself while we sampled Elkhorn Slough Brewing Company’s finest. No meltdowns, no tears. We thought we might be pushing our luck, but still she was in good spirits. And now we were at the beach—not to swim, but to play in the sand a bit and get our toes wet.

Of course this didn’t resonate with a  three year old. She immediately set off towards the frigid waters of the Pacific, only stopping at the water’s edge. Feeling the cold of the ocean touch her, she immediately would run back up the sand, and then repeat the process. Like a train wreck you see coming a long way off, I could tell that one of these times a wave would overtake her so I positioned myself between the ocean and my daughter just in case. My hope being that I could grab her before the current had the chance to engulf her into the sea. Quite the opposite occurred: a wave came rushing through us and tossed her onto the sand. As I had positioned myself for the opposite extreme, I couldn’t reach her in time to prevent the shock of being tossed by an icy hand up onto the beach. I only saw the terrified look in her eyes. And in a moment the wave recessed and she laid in shock onto the sand looking up at me, then her mother. Then the tears came. She was cold and scared. We both reached her at the same time and embraced her, but she was completely soaked. She shimmied away from us and began to make angels in the warm dry sand to get warm. She had affectionately become our “sugar cookie.”

She learned her lesson, and we all received a deep scare, but my daughter was fine. In the scheme of things, it could have been much, much worse. We counted our blessings, got her changed, and made the short journey home.

From this point on, the rest of the day was a blur. I don’t think my daughter stayed awake more than 5 minutes on the 20 minute drive home. I’m not even sure what we had for dinner—probably leftovers. I probably walked my dog, Kit, and called it an early night. Whatever the case, we made this day incredible and memorable. I remember falling asleep that night with a smile on my face and happy thoughts on my mind. The day wasn’t planned or thought out, but it had been wonderful. For us, more than anything it was simply just a Saturday on our Central Coast. We can’t wait to do it again!

Until next time see you on the roads, paths, and in the breweries!