My alarm had only been off for five minutes when my three year old wandered into our bedroom. Still in bed I mentally prepared to race. “Mommy,” she huffed, “I don’t feel— BAAAAARRRRRFFFFFF!!!!” And like that my 3 year old vomited all over the dog’s bed. 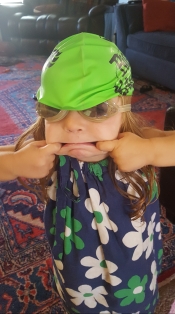 Fortunately, the dog sensed things were not going to go her way and quickly vacated for the sanctuary of our bed. This was not the optimal race morning situation. It was August and I continued my path of climbing back into racing:. Today’s race: Tri Santa Cruz. Now, however, we sprang to action: my wife got our daughter cleaned up while I got the coffee going and continued race prep. Taking a quick glimpse outside I saw the fog clinging to the ground. I wondered how things were in Santa Cruz, 40 miles up the bay. Erin came down and shook her head. She didn’t have to say it; her face said it all—Isabel was sick and they weren’t going to go. I’m no parenting expert but the last thing you want to do is take a sick toddler out to follow her dad racing around Santa Cruz. I would go solo—wasn’t the first time, and probably won’t be the last.

By 6:30 I drove towards Santa Cruz, getting into a mental race state. Listening to a diverse medley of music from decades of motivational playlists and mix tapes, I envisioned the race course—focusing primarily on the open water swim in the Pacific’s chilly waters. Early in the week I waded out from Monterey’s Del Monte beach in my wetsuit and did a half mile open water swim. While it wasn’t my first open water swim,  I needed the swim to mentally reassure myself that I wouldn’t go into shock entering the water. I easily knocked out a half mile swim—the race’s distance. I was going into this morning very confident of being able to deliver during this crucial stage of the race.

Upon arrival in Santa Cruz I checked in and organized my equipment in the transition area. The day before I came to pick up my race packet and familiarize myself with the area: the swim site, the transition area, and the bike & run courses. This reconnaissance paid huge dividends as I saw that the distance one had to run from the beach to the transition area was nearly a quarter mile! Along with that, I could mentally see how the swim would unfold alongside the Santa Cruz pier. Now on race morning I put on my wet suit and walked down to the beach. The fog hung low and thick around the race. Arriving on the beach the fog was so low that the swim would have to be shortened. You could hardly see more than 100 meters into the surf. Because of the fog’s density, the waves of swimmers started late—not nearly as late as the SLO tri, but maybe 15 minutes. I stood with fellow age-groupers watching the swim waves launch from the sand into the surf. We commented to each other that the distance had been shorted to accommodate the fog. Privately I think we were all a bit grateful for this. Finally it was our turn. We lined up in a corral focused on the water and before we knew it, a whistle blew and we were off!

Running down from the corral to the water I had only one thought: don’t be the guy that trips and rolls into the surf. Fortunately, I wasn’t. I entered the water diving into a breaking wave and started my swim. I started slow to allow my body to adjust to the cold. 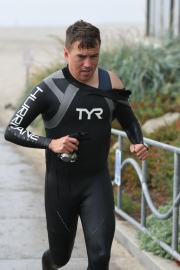 My pace became comfortable as I made my way to the first marker and hung a right.  Even with swimmers crowded around me, I felt comfortable. Before long the second marker entered my field of view and I rounded it, aiming my sights back to the beach. Shortly after I was out of the water and running back to the transition area trying to pull off my wetsuit to ease my transition to the bike. A grin ran across my face.

In the transition area, I wrestled out of my wetsuit before throwing on my cycling shoes, helmet, and glasses to head out to bike. Mounting my cycle I headed out on a 6 mile, 2 loop (total 12miles) course along  Santa Cruz’s iconic Cliff drive. As I rode  the sun slowly burned off the fog  exposing the beauty of the Central Coast. As with all triathlons I couldn’t tell where I stood with my age group—only keep tabs on my own pace and prepping myself for the run. I flowed over the course, launching around corners and sprinting straightaways. The ride felt natural and powerful. Before I knew it I was taking the final turn back to the transition area for the last event: the run. 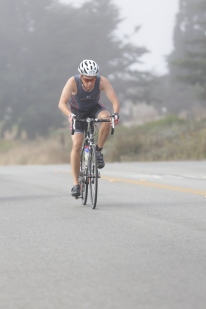 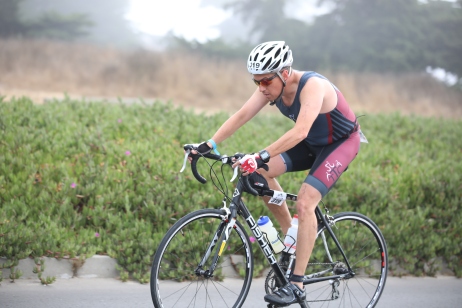 Hopping off my bike I felt good heading into the run. Throwing on my running shoes  and venturing out, my legs seemed unphased by the quick transition. While I wasn’t exactly running a 5 minute mile, I felt at ease as my feet danced across the pavement. The 3.1 mile/5km course continued along Santa Cruz’s Cliff drive. In the melting fog it was truly a beautiful sight to behold. I turned around at the half way mark and headed back to finish. This was a flat, fast course—no mile long hills or heat bearing down—just the cool ocean breeze and a rising sun. I rounded the last turn and followed the path passing one last racer in a dead sprint over the last 50 meters. And like that I crossed the finish! I had done it once again! 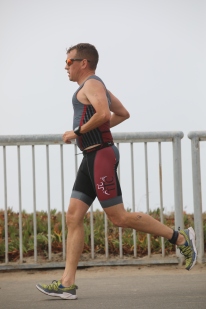 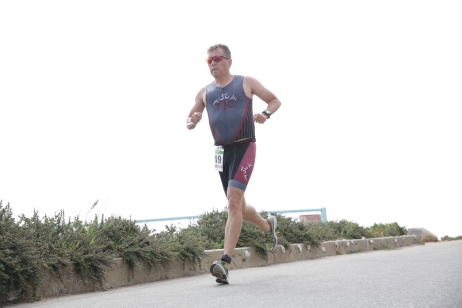 Throughout the race despite my immediate family not being present, I wasn’t alone. In the transition area and throughout the course, my other family from the Triathlon Club of Monterey (otherwise known as TTC) filled in and cheered me and other club members on. 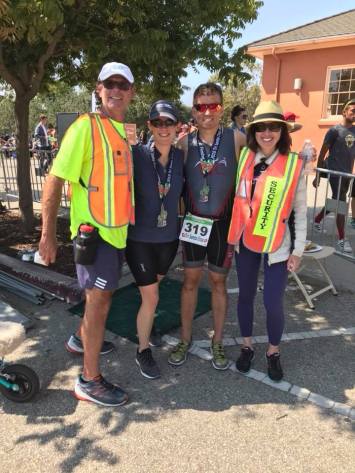 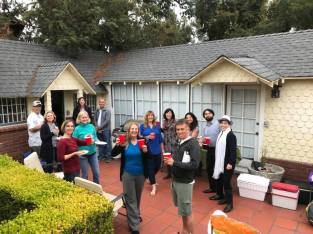 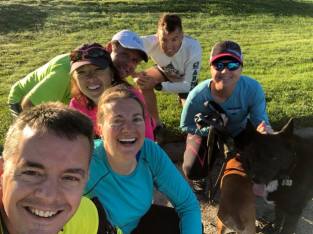 Once complete I took my place with them and welcomed other club members to the finish. The club is a great group of like-minded athletes in the Monterey area who organize various workouts throughout the week. I’ve been fortunate to have joined the organization earlier this year. I look forward to continuing my membership into next year as well. On this day in Santa Cruz my TTC family was there for me and I was grateful. As I enjoyed the camaraderie and basked in a post-race high, my thoughts turned to the next adventure of the day: visiting Discretion Brewing Company in Aptos on the way back to Monterey.

I bid my Tri Club friends farewell and ventured to Discretion Brewing. I recently sampled their Shimmer pilsner and thoroughly enjoyed its crisp, refreshing taste. 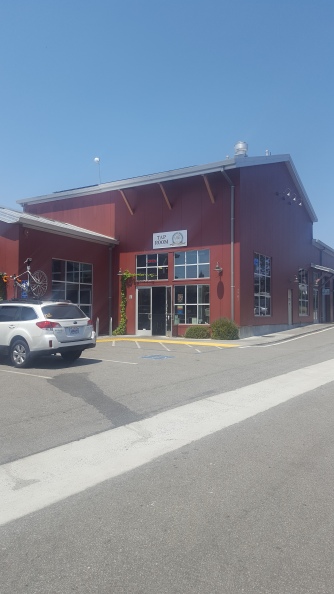 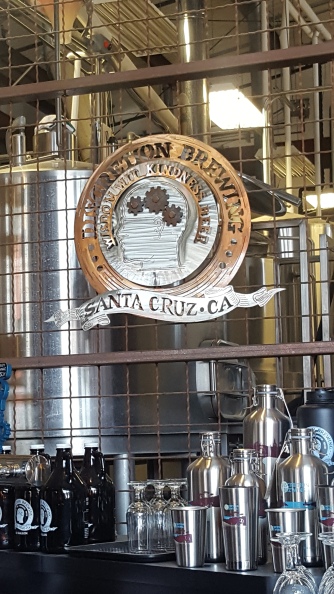 Now came the real moment of the truth: how did the rest of their beers measure up? I wasn’t disappointed. Here’s a rundown of my flight:

Redwood Mountain Blonde: their blonde ale with a easiness and crispness that left you wanting more—especially after a triathlon!

Shimmer Pils: This was the original beer I’d bought and fell in love with. Why not get reacquainted with this friend? And this beer did not disappoint with its simple taste.

Ten Million Flowers: A German-style Kolsch that also paired well with a warm day and post-race satisfaction. This beer went down easy and smooth. 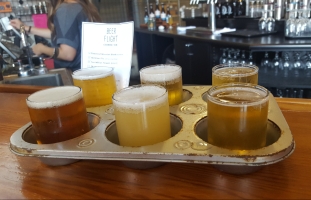 Uncle Dave’s Rye IPA: After starting off light and crisp, I delighted in the more complex flavors of this Rye IPA with fruity undertones and a slight peppery finish.

Coconut Telegram IPA: Another great beer from Discretion with the deep flavor of an IPA with coconut. While not overpowering, this beer was simply delicious!

Cruiser Weisse: This is their Berlinerweisse and again I wasn’t disappointed in its flavor with hints of fruit. It was a nice way to round out my selection and day.

I paired this delicious sampling of beers with some of their street tacos—the perfect way to celebrate a great race! Despite the rough start things worked out. And while I didn’t exactly have my own cheering squad, I felt good and had my team to cheer me on. I would even find out later that afternoon that I even finished second in my age group!  I was hungry for more and felt on top of the world. I pondered what was next. Unfortunately, as I would shortly find out, life had other plans for me.