After Tri Santa Cruz I was back in the saddle once again! Racing, feeling strong, and ready for anything, I started making plans for future races. Maybe I could finally knock out an Olympic triathlon by season’s end or a half marathon! You name it– anything was possible.

And then reality hit me in the face. Or rather a sidewalk did.

Two days after Santa Cruz I was in Tampa, Florida for work. Exiting a building after a meeting, I passed out onto the concrete and spent the next seven hours being examined at Tampa General Hospital’s emergency room.

They couldn’t find a root cause after x-rays, blood tests, MRIs, the works. Nothing. It was bizarre. I felt damaged though: my face completely scraped up, my right hand in pain, and just generally terrible. While I didn’t have a concussion, all my momentum evaporated. I spent most of August and the first half of September recovering. It felt like one step forward, two steps back.

I called my wife from the hospital, “Honey, I’m at the hospital, but the good news is I didn’t break anything.” She replied, “thank God for small miracles!”

My three year old immortalized me forever in art work entitled, “My Daddy’s booboo”. It hangs over my desk now.

Slowly I got back to training: short runs with Kit, morning rides on the trainer, and of course pool swims. Monterey’s foggy cool summer gave way to bright clear warm autumn. With these incremental changes I felt more like myself. By late October I wanted to get back to basics. It was time for another path and another pilsner. I looked around the county and found just the combination: Point Lobos State Park and Carmel Craft Brewing Company.

There are few running spots more scenic and magestic in Monterey County than Point Lobos State Park. Jeffrey Van Middlebrook in his book, Monterey Trail Runner’s Guide, described Point Lobos as “the jewel of the Monterey County parks system,” and that it is “spectacularly situated trail runner’s paradise with a fantastic selection of routes…”[1] I recently rediscovered his book when my wife, thinning our shelves, handed it to me and said, “Do you still want this?” His book is a fantastic reference for the four great parks of Monterey County: Garland Ranch, Mission Trail, Jack’s Peak, and Point Lobos.

On this day though I ran what Middlebrook calls the Big Outer Loop, a 6-mile run which presents the very best of Point Lobos. While Middlebrook describes the run going from south around to the north, I opted for the reverse, jumping on the Carmelo Meadows trail to the Moss Cove trail, and reaching the park’s north boundary. Backtracking on the Moss Cove trail, I eventually rounded Whaler’s Cove and took the North Shore Trail which launched me around to the park’s western edge. Point Lobos did not disappoint with its views: clouds danced from sea to shore and out again. Waves crashed along jagged rocks. I stopped and took pictures now and again, but mostly took my time absorbing the beauty around me. Eventually I met up with the South Shore trail to explore exquisitely formed beaches and inlets. At the park’s southern tip, I met the Southern Plateau trail and headed north to my car. When I finished, I logged six more breathtaking miles to my log.

As one can imagine somewhere this beautiful isn’t a secret for the throngs of tourists descending to the Monterey Peninsula. If solitude is what you’re looking for at Point Lobos, choose your time wisely. As Middlebrook points out, “I run there on weekdays when it opens or just before closing. Forget holidays or weekends!” due to the increased traffic, and he wrote that nearly 20 years ago! More recently it’s gotten so bad at Point Lobos that a reservation system for visitors is now in the works. According to the Monterey County Weekly from September 2018:

The community has spoken, and State Parks has listened: Starting as early as next summer, visiting Point Lobos State Natural Reserve will require a reservation, aimed to prevent the park from being loved to death, and to curb the sometimes chaotic parking on the side of Highway 1.

It appears the days of dropping into Point Lobos for a quick run maybe drawing to a close. Runners shouldn’t worry too much, however, as the article points out the San Jose Creek Trail, which sits east of Highway 1 on the Point Lobos Ranch is set to open in 2019 and will effectively link Point Lobos Park with Palo Corona Park further to the east. The downside: there may only be 2700 reservations available each day, although as the Monterey County Weekly points out, “that number may change a bit.” More to follow, but change is in the wind. 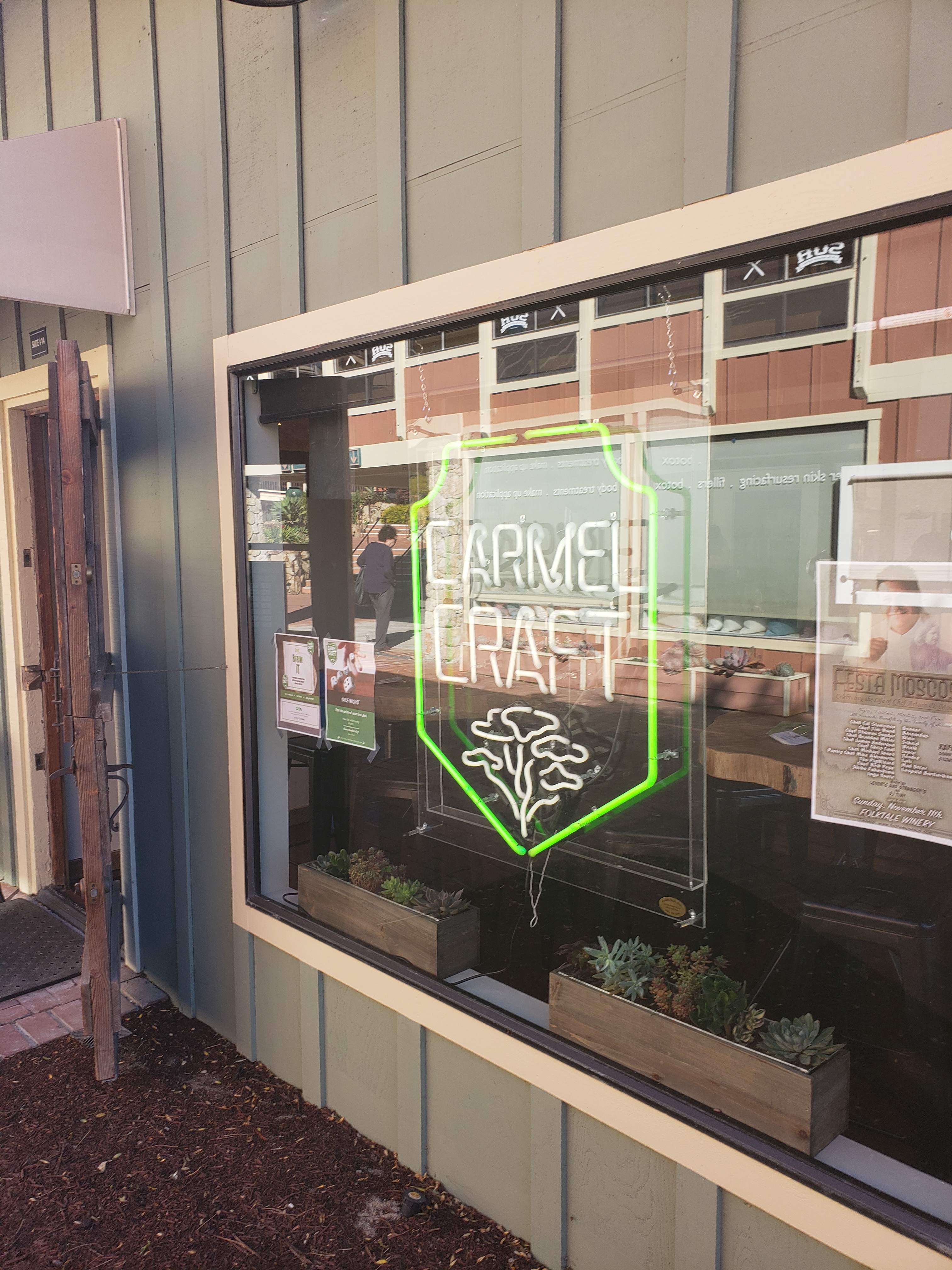 Speaking of change, the brewery scene in Monterey continues to improve, and after my incredible run I wanted to check out the newest brewery on the peninsula. Located at Carmel Barnyard, Carmel Craft Brewing Company  opened its doors in late September. Carmel Craft is the brainchild of Mark Fitch who brought together the local favorite, Mad Otter Ale, along with Carmel Valley Brewing, and opened a taproom at the Barnyard. The taproom is quaint but welcoming. Talking to Mark while I picked out my sampler, he informed me that this was just the beginning– an expansion was already in the works. From the quality of the beers I tried, they won’t have any problems with growing. Here’s a brief rundown of my picks:

Carmel Valley Blonde: a light crisp refreshing beer! I was pleasantly pleased with this beer as I started exploring all Carmel Craft had to offer! 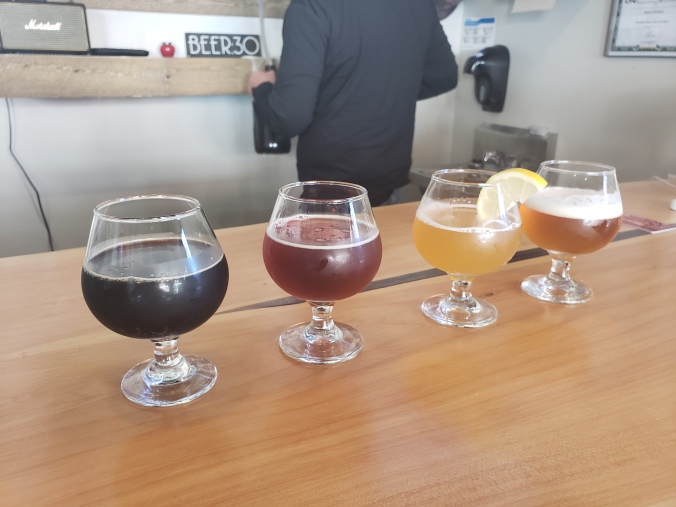 Carmel Valley Wheat: this is your traditional American-style wheat with a mixture of citrus flavors and enjoyed with a lemon wedge. It hit the spot after my run.

Carmel Classic: Next up was this one, their American Amber ale, a diverse blend of three kinds of hops and malts, and full of flavor. I would watch football with this beer!

The Barnyard Ale: Quite simply my favorite—this saison was sweet and simple. The beer seemed to bridge between a hefeweizen and a Belgian ale. By far my favorite on this day! Even the Monterey County Weekly enjoyed this delicious beer, calling it an “orange-scented caramel.” 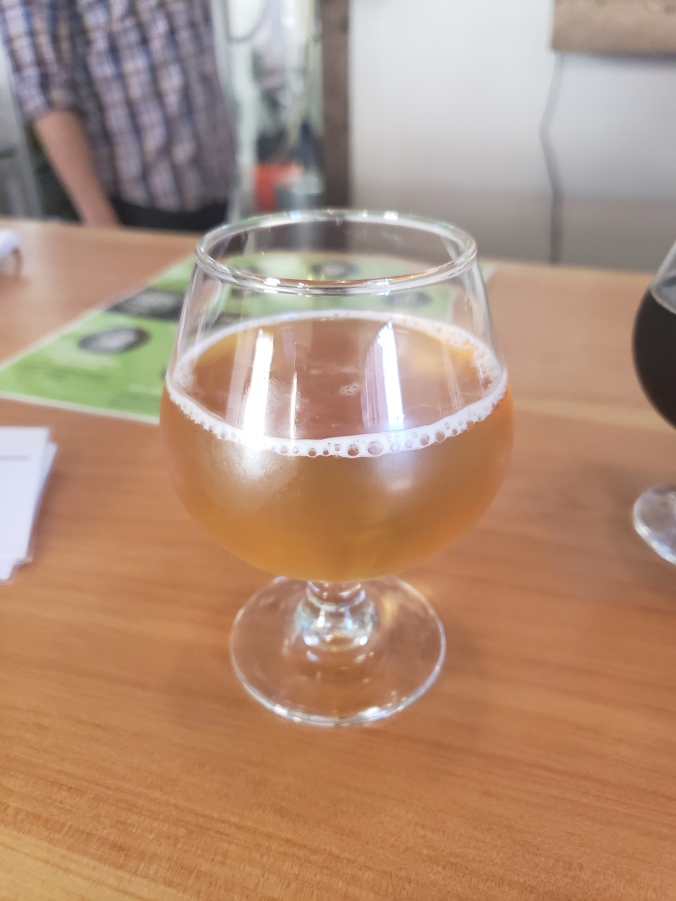 Finally, after enjoying all of these, Mark allowed me a sample of the member’s only Dopplebock, a strong German style bock beer weighing in at 9% alcohol by volume (ABV). While it backed a punch it didn’t come over the top as too heavy, but along with their others was a winner in my book.

As I mentioned, the Monterey County Weekly already wrote up a great review of Carmel Craft Brewing and its saison in late September. The future looks bright for Mark Fitch and his team and I for one look forward to seeing what they have brewing up in the future. I will go back after a future run—I know I won’t be disappointed.

At the end of this day I felt good to be back to basics: I’d found my pace again running through Point Lobos’ beauty and my pallet cleansed by Carmel Craft Brewing’s  refreshing taps. I was in my element again after stumbling. Soon though I would be tested again: the Morro Bay triathlon beckoned a couple of weeks away.

2 thoughts on “Back to Basics: A Path and a Pilsner”