At a passing glance, you wouldn’t think there would be much to western Missouri in late June: rolling green hills, hot humid days, and maybe some mediocre beer. Well that couldn’t be further from the truth as I discovered during my recent visit. I had been invited out for a week long conference at historic Fort Leavenworth, Kansas, and made it my goal to report on some good trails and beer while there. The Prairie Creek Greenway and O’Malley’s Irish Pub in Weston, Missouri answered my call. 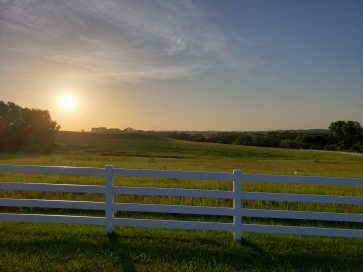 I’ve been coming out to Fort Leavenworth off and on through my Army career, so I already had a good basic knowledge of the area before this trip. And while the much larger Kansas City to the southeast offers a wider variety of breweries such as the ever popular Boulevard brewing, the area around Leavenworth isn’t without its own gems.  On the paths side, I was no stranger to trails in the area: in 2007 while attending a course at Leavenworth, I jumped into the inaugural 15-mile Psycho Summer Trail run at Lake Wynadotte County Park.

During subsequent visits, I’d looked for a time and place to get some great miles under my belt. On the pilsner side, I knew the place I wanted to write about: Weston Brewing Company co-located at the O’Malley’s Irish Pub in Weston, Missouri. Another staple of the Fort Leavenworth scene, I was no stranger to O’Malley’s and the Weston Brewing Company, being first introduced in 2003. They host one of the larger Irish Festivals on St. Patrick’s Day in the area, which I was fortunate enough to attend on another visit in 2017. This trip, however, the stars aligned to bring me back in decent enough weather to find both a good trail and great beers along with some random Mexican food thrown in.

As I’ve mentioned before, trying to balance fitness and traveling is hard for me. Staying on a training schedule while getting over jet lag and running back and forth to meetings is a struggle, but there are times when I get up early and get out the door to meet the day. This trip to Fort Leavenworth was one such example.

Knocking out a few 800m intervals 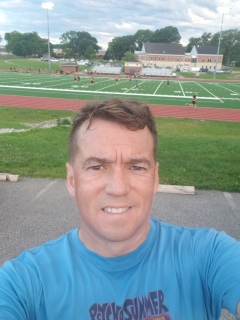 My first day on the ground, I got out of the door of my hotel and ran 3.5 sluggish miles around town. The next day, I surprised myself making my way to the local track to knock out 4.3 miles, in the form of 4x800m.

Two days and a little bit of research later, I ventured out of town to check out a local trail. I thought about checking out Lake Wynadotte again, but due to time constraints, I looked for something a little closer. What I surprisingly found was Prairie Creek Greenway just over the Missouri River in Platte County, Missouri.

Tucked away among the rolling hills of western Missouri, Prairie Creek offered a short, but scenic and tranquil run in the serenity of a warming summer morning. I found a parking lot, looked around a little bit, decided on a route and set off along the trail’s smooth paved paths towards the north. Winding around the creek, I saw the usual wildlife of birds, deer, and rabbits playing in the morning’s coolness. 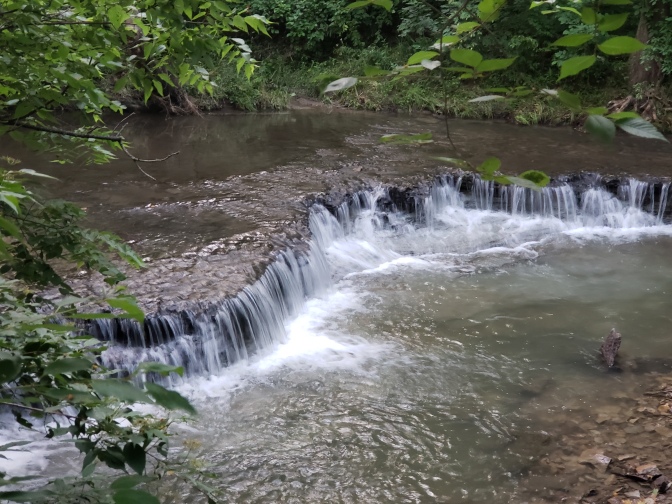 I followed the terrain and trail as it bounded through a subdivision and back into the woods. It was a nice release from the day of meetings that lay ahead of me.  While I only opted for a quick out and back of 4 miles, runners could easily extend the routes to branch off on various trails to get more miles in. It was the perfect warm-up for the day. As I finished, summer began to pump up the heat and humidity and I could feel it. I got on the road to continue my day. 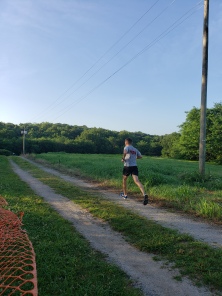 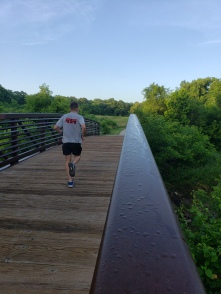 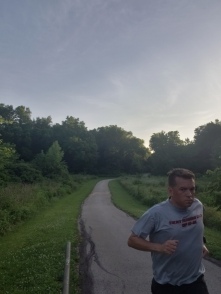 What better way to pair this run than with the great beer selection of Weston Brewing Company and the food of O’Malley’s Irish Pub. Working with my team through the day, we opted to make Weston our evening destination. No one was disappointed. 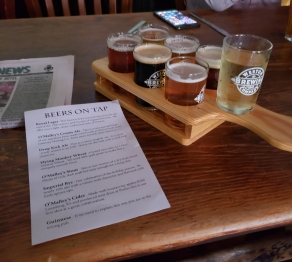 Opting once again for a tasting flight, I sampled 6 of their beers and one cider. Among my favorites included:

Flying Monkey Wheat: a smooth take on the American wheat style beer. I found this beer very palatable and easy going. You almost didn’t realize this was a wheat!

O’Malley’s Stout: No trip to an Irish-influenced brewery would be complete without sampling their stout. And WBC delivered with their rich, flavorful brew which didn’t come off as overly heavy or thick.

Imperial Rye: Being a fan of heavier beers, I couldn’t pass up their rye, even if it was in the 90s outside. Still the beer stood tall, and came off very flavorful and tasty. While I wouldn’t necessarily recommend it as a summer porch drinking beer, it’s definitely a great beer.

O’Malley’s Cider: Now I’m not a cider guy—and maybe I should blame the heat—but their cider hit the spot on this summer evening. Light and crisp and not overly fruity, this cider was a winner.

While these beers were great and the food just as complimenting, what happened next made the evening. Underneath Weston Brewing Company & O’Malley’s exist a labyrinth of rooms which aren’t always open to the public. By luck and kindness, we were able to get a tour of this underground lair. Our guide first took us below the O’Malley’s main bar, to the their stage and second bar, down a narrow corridor in a large cool room which once was used to store ice, and later in fact became nothing more than a trash pit. Any visit to WBC should try and include taking in O’Malley’s hall room and stage, especially on Friday and Saturday nights when they have live music. Even more interesting that the hall room, was the tour we received of another lower unfinished room which I had never been to.

It was simply amazing to see the work put into this maze of rooms and tunnels which at one time extended nearly half a mile underneath Weston, although just the rooms under O’Malley’s now remain. To finish off our tour, our host even threw in a shot of tequila, which although not my favorite, couldn’t be passed up. 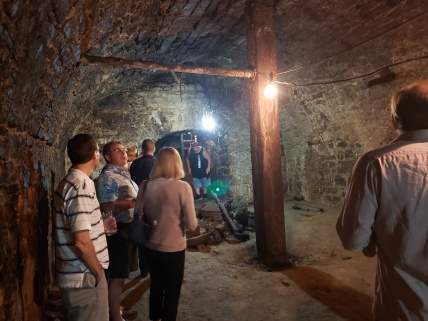 With the sun setting my group and I decided to walk down through Weston and another adventure ensued. Passing by a rustic collectibles stop called Cactus Creek, a sign in the window offered “Tamales tonight! Check Inside.”

No sooner had we noticed, than one of the owners stuck her head out and said, “Please come in and join us! We have batches of tamales to be eaten!” How could you not pass up tamales? For a small donation, we were able to grab a tamale, and have a beer—yes, they had a wall of refrigerators full of beer down there—and watch some TV for a bit. Next thing we knew, we were down eating tamales in the basement of this store, drinking our beers and doing our own commentary to the show Naked and Afraid.  Don’t get me started on Naked and Afraid—everyone has their vices, and this is one of mine. Yes, the show is watching a trainwreck, but such a good trainwreck to watch! For my beer, I opted for Boulevard’s Radler—a German influenced beer of lemon and pilsner, which always pairs well when eating spicier foods. 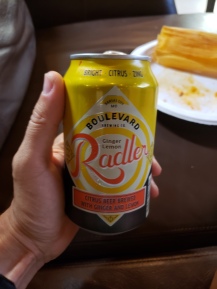 The remnants of a tamale lay in the background

As we went to say our good byes, the proprietors asked for our assistance in moving some items back inside for the night. While it was nothing more than a couple pieces of furniture, they graciously rewarded us with a 6 pack of mixed beers, which we of course accepted. (How could we not?)

Thus our trip to Weston came to a close: with a six pack of beer, tamales in our guts, and a warm summer night in our midst. The next day my workshop wrapped up and I headed home to Monterey. Throughout the flights home I couldn’t help but smile thinking back to my previous day and the adventures had. Despite heat and humidity, the warmth of the lush green hills and welcoming people of this part of the country left its mark on me. If you’re ever in the area, take a trip out to run the Prairie Green Parkway and Weston, Missouri, and experience all they have to offer. Until then, enjoy your paths and pilsners! Cheers!