Before we get to the gut wrenching conclusion of this incredible epic tale of survival (and yes since I’m writing this, we have in fact made it to Tennessee, so please get some sleep), I’m going to take this post to talk about two of the most horrific parts of this trip. These aren’t for the faint of heart so if you get queasy easily, don’t look any further—we’re talking some real horror stuff here like the original Nightmare on Elm Street. And before I forget, yes, there is a beer at the end, so it’s not all doom and gloom.

Don’t say I didn’t warn you.

Day 6: Survival of the fittest.

Now there’s pretty reliable notion out there that if you put an infant in a car seat and drive them around they’ll fall asleep quickly. And while that might hold for 99.9% of the infant population, guess whose infant falls in that 0.1%?!?! Yeah, this guy! My infant loathes her car seat—I mean when she gets in it, we’re talking not cries, not even screams, but animal like howls and guttural roars of demons from the 4th dimension. Yeah not a real pleasant experience.

The horror, the horror

I mean I love her completely but she wails like a banshee. 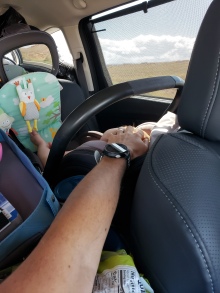 There’s a reason why they play baby cries in survival training I’ve been told, but my daughter seems to take it to the next level. The remedy so far has been one thing: reaching back and rubbing her head until she sometimes falls asleep…sometimes being the key word. Needless to say, her roars could be used against enemy armies with great effect (but are probably banned by the Geneva Convention too). When I say my infant had a break down, this is what I’ve been talking about. Compound this with the fact that it triggers the toddler to break down, and then the dog to lose it, and this trip takes on a whole new level of survival.

Add to it this the most horrifying four words any parent ever wants to hear on a road trip: I gotta go POTTY!!! These words exacerbated as you pass the road sign reading, “Next services 57 miles” and that sinking feeling of impending doom sets in. You can almost hear the theme from “Psycho” playing as your stomach drops. It’s the stuff nightmares are made of. Thankfully there was an exit 5 miles down the road…and she learned to squat behind a mound. Problem solved!

I didn’t run because my calf still bothered me….yeah, sometime you gotta rest. There would be other days, right?

When we finally got to Fort Smith, the temps still hovered in the 90s with the humidity maxed out. Fortunately, we arrived at a decent hour and set up our camp at the local La Quinta Inn, which compared to a lot of hotels has a pretty reasonable pet fee, and a pretty decent breakfast (I mean seriously, who doesn’t like the waffle machine?). Being on the verge of exhaustion, I offered to go get some take out from Chilis across the parking lot. Waiting for the food, I couldn’t pass up the chance to try a local brew. My choice: Lost Forty Brewing from Little Rock, Arkansas. The beer: Day Drinker Belgian Blonde, a light, but flavorful hazy blonde beer, perfect for a hot day on the porch, but even better after surviving a day on the road with a screaming toddler!

I got the food, and we feasted on Chilis (which really tapped me out for road food at this point and made me crave a salad or like some hummus). Nothing left to do, but eat, try and relax and go to bed. Thus was our day 6 driving from Elk City, Oklahoma to Fort Smith, Arkansas. I’ll leave the gaps to your imagination. One more day remained…