Day 7: WE FINALLY MADE IT!!! I’ll cut to the chase on this one—we made it. We survived. We endured. It wasn’t pretty, it wasn’t exciting, but we did it—we crossed our finish line at Naval Station Mid-South in Millington, Tennessee. In the end we put our heads down, leaned into the wind and charged forward. I mean let’s be honest here, have you ever heard anyone ever say the best parts of a marathon are miles 19-25?!? I know I never did, and that’s what this felt like (And if that’s your favorite part, I’m not judging you, I’m just making a point). It was hot and sticky…which is nice when you’re sitting on a Caribbean beach with fruity rum drinks, but makes sitting in a car even with the A/C on pretty miserable. But finally, after 7 days on the road, we made it! 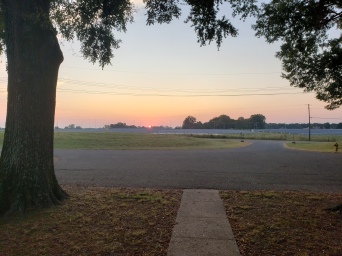 At first we stayed in a vacation cottage they have on base, but we’re moving into our new house as I write this. I’ve been eyeing new running and cycling routes. It always makes me nervous when I don’t see a lot of wide shoulders or cycling lanes…I guess I can just cycle early, right?

Four days after we arrived the movers came and dropped off our stuff. Somehow we ended up with an extra vacuum. (So if you’re missing one and moved recently, let me know). We also seem to be missing a couch cushion and a couple of power strips (how does a couch cushion walk off?) It’s still hot, but everyone says the second half of October should be much nicer…or maybe November. Depending on how unpacking goes, I may put up my Christmas stuff now…and just keep it up (I mean after 6 months is it really procrastinating or just planning ahead for next season?).

The base has a splash park for the girls which they love. The toddler seems to rule it with an iron fist leading new friends through the maze of water obstacles. The infant is just perplexed by water. But if it wears them out in 90+ degree heat… 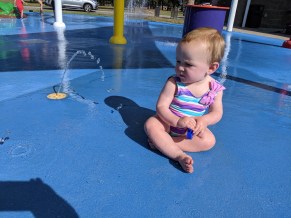 I’ll keep you all posted. Looks like lots of good races in the coming year. I’m already seeing a half marathon in my future in Memphis. Can’t wait to see what we find! I’ll let you know.

One final note before I do the final roll-up here. My bike. Now understand that I love my family very very much, but I got to be honest here. Nothing stresses me out more than watching the movers unpack my bike. I dread seeing it pulled out of some crate in pieces or mangled beyond recognition. Fortunately, this wasn’t going to be one of those times. It came out more or less in tact! I was able to dust it off, fill up the tires and get it road ready. Of course finding my helmet, gloves, and cycling shoes took another week, but the bike made it.

Then this last weekend I finally got up one hot, hazy, humid Sunday morning, and ventured out on the roads. I was pleasantly surprised on what I found.

Sure some of the roads were narrow and kind of unnerving, but far and away they were paved, and at 7am free of traffic. I first toured around the base– to make sure my bike wasn’t hiding any major problems, and headed off and onto the Tennessee roads. More or less the ride was uneventful– few cars were out, the sun coming up, and places existed with even wide shoulders. 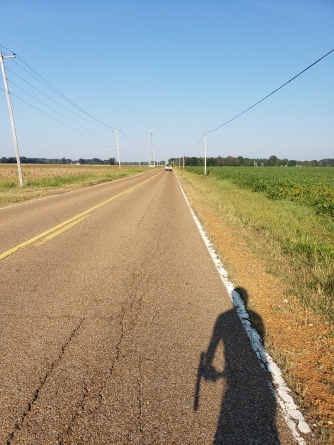 Here’s one more roll-up on this entire trip:

Infant meltdowns: 20 something? (I honestly lost track and may in fact have some hearing loss)

# of times the Lion King soundtrack played: 87 (Let me know if you want me to sing it at your kid’s birthday)

# of French fries consumed: Probably in the hundreds, although as we got further into the south I started on the fried pickles. That’s healthier, right?

# of band aids required by my 4 year old to cover her quarter inch scratch now: 0 (she has a booboo on her chin which requires 5 band aids)

# of bottles of wine consumed: 5 (we may have had a few more since arriving)

# of times I nearly lost my sanity: 8 (I survived—is there a finishers’ medal for this sort of thing???)

Thus this new adventure begins! Good bye California– you’ve been wonderful, but alas we must part! Hello Tennessee, we look forward to getting acquainted!