At the beginning of March 2020, as the country began to awaken to the dangers of the deadly Coronavirus and terms like “self-isolating” and “social distancing” came into vogue, I took a quick and important trip home to see my dad in Maryland. Just over two months had passed since his wife of 23 years, Mary, lost her three year fight with cancer on New Year’s Eve. While she will be interned at Arlington National Cemetery sometime in the coming year, this trip was to celebrate her life with friends in Annapolis, Maryland and be with my dad. I also took it as an opportunity to see some of my own friends and become acquainted with local trails and reacquainted with a great brewery.

For all the beauty of Annapolis and its surroundings, the one thing it always lacked were good, dirt packed trails. Running cross country in high school, I don’t recall many local trails to run on, instead trotting around various high school fields.

With that said, in the nearly 30 years since I ran there, paved trails emerged. For this trip, I found three such trails to stretch my legs.

The first, and probably the most well-known is the Baltimore & Annapolis Trail, more commonly known as the B&A Trail, which was built on the old rail line of the Annapolis and Baltimore Short Line Railroad established in 1887. Since being discontinued in the late 1960s, the rail line found a new use being converted to a paved trail running from Annapolis to Glen Burnie in the 1990s. Now finished, the trail runs 13.3 miles. My first day in town, I couldn’t resist

running a few miles on it, and in mild conditions wearing shorts and a pullover, I parked at Arnold Station, and jumped on it for a pleasant flat out and back 5 miler.

Within 24 hours the weather changed and turned downright nasty. A cold wind and rain descended on the Broadneck peninsula. Somewhere deep inside I found the discipline to mount up and hit another trail. This time I ran my old neighborhood, Cape Saint Claire, just north of Annapolis, one of the last major Annapolis suburbs before you hit the famous Chesapeake Bay Bridge and Eastern Shore. Over the last few years, a tributary trail of the B&A Trail, known as the Broadneck Peninsula Trail emerged along College Parkway and provides an excellent path for recreational use. I used it as my springboard into Cape St. Claire. The wonderful thing about exploring “the Cape,” is not much changed over the decades. A few more houses may have sprung up, but the Elementary school I attended and the local grocery store, Grauls, are still there. Mainly this 4.3 mile loop was more or less a grudge match between the weather and my attitude, and I came out on top. 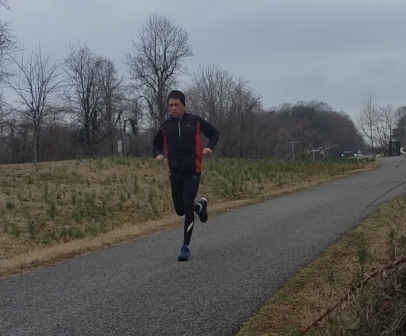 Starting and finishing at the Broadneck Library, I looped around into Cape, replacing the trail for familiar sidewalks and running by my old house, then jumping into Broadneck Park for a mile, before checking out the grounds of my alma mater, Broadneck Senior High School. It was a cold, dreary trip down memory lane, but I found vindication in accomplishing the run.

After the rains, the sun emerged the next day along with some gnarly winds out of the north. Temperatures dropped to near freezing and I could tell it was going to be a gut check to not only get out, but get a long 10 mile run in. Go big or go home, right? And so I did, venturing off the Broadneck Peninsula to Kent Island across the Bay Bridge to check out a trail I’d read about years before: the Cross Island Trail. Roughly 6.5 miles long, spanning Kent Island, the trail starts on the west side of the island at the Terrapin Nature Area before heading east. I opted to log in a few miles through the unpaved trails of the Terrapin before jumping on the paved ones. I didn’t regret it. Despite the mud and wind, the views looking west to the Bay Bridge made it worth it. Not to mention the solitude that Saturday morning. Getting on the Trail, I wasn’t disappointed either.

Long straight lines of this old railway trail made for a pleasant Saturday run. I opted for an out and back of about three miles each way. Combined with a nearly three mile loop around the Terrapin Nature Area, I made 10 miles. When I go back next, I will definitely keep the nature area and trail in mind for picnics, runs, or even walks.

Finally, no adventure would be complete without a trip to a bar for a beer with a friend. For this trip, I was fortunate enough to link up with my good friend Martin, whom I’ve known for nearly 15 years since our paths first crossed in 2006 in Monterey. 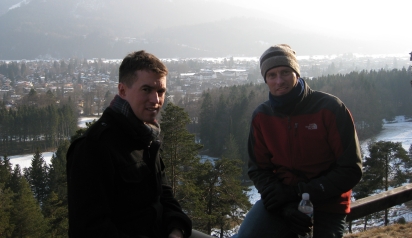 Now while I served in the US Army, Martin served in the Royal Navy. Our paths continuously crossing as we went from swinging bachelors to husbands, and now to fatherhood. Gone are the days of staying out until sunrise, now we go for beers and return home by 10pm. He and his family recently moved to Annapolis from Japan so that his wife could take an assignment back at the Naval Academy. Having been there for several months he had yet to check out one of Annapolis’s best breweries: the Ram’s Head tavern, so naturally we went.

The Rams Head Tavern, just off West Street in Annapolis, is one of the oldest & best breweries in town. If you want to sample great beer in Annapolis, the Ram’s Head Tavern is where to go. For this particular night, instead of going with my usual calling card of a varietal tasting flight, I jumped right in to their just tapped Cat 5 Key Lime Lager. The beer was spot on, just in the wrong time. The Cat 5 came off as light, crisp, not overly fruity, but just the right amount of lime and sweetness to it.

It would have been much better about two months down the road, as the heat and humidity of summer started to build up along with the traffic on Route 50 heading across the Bay Bridge to the Eastern Shore. It was a truly great porch drinking beer. Martin and I probably could have stayed talking and drinking all night long. Instead being that we’re somewhat reasonable adults now, we left by 9:45pm, I dropped him off by 10pm, and I was in bed by 10:20pm. Ah, how the times have changed! 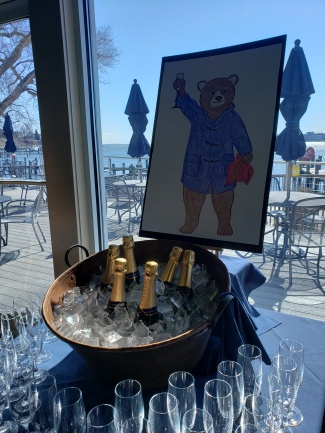 n the end, however, my main purpose for being there was my dad. On that Saturday we hosted a celebration of life event at the Severn Inn on the backs of the Severn River across from Annapolis. It was a beautiful sunny day and many of their friends came out from up and down the east coast to celebrate my stepmother’s life. It was a somber, yet uplifting event to honor my dad’s best friend and partner for the last quarter century. Little did we know, that within the coming days and weeks such an event would be impossible as the coronavirus took its deadly grip on our lives. But this was still early March, and the harsh realities of life had not taken hold just yet. The days and weeks to follow would tell another sad tale. But that’s another story.