“Courage is being scared to death and saddling up anyway.” — John Wayne

As I mentioned before I use to run a lot of races: half-marathons, 10kms, various trail run distances, and of course sprint triathlons. Then came the accidents and the long road to recovery. Since then I learned to walk again, then swim, and finally run. Biking came last when I could get my right knee to bend far enough. Three years later I stood poised to start racing triathlons again, yet a layer of anxiety existed. This is the story of getting back to the starting line (and some beer along the way).

After the long wait I stood ready to race. I always wanted to race, but the timing was off. I broke my wrist and knee in the summer of 2015, and a year later I was just getting the hang of running back once again. By 2017 I could do all three, however, a move from Japan to Monterey, California disrupted much of my training schedule, not to mention my bike shipped on a slow boat taking over two months to arrive. By 2018 though, I felt ready. I joined the local triathlon club, Monterey Triathlon Club or “TTC” as we affectionately refer to it. My goal this 2018 season: to race an Olympic distance triathlon. Now an Olympic distance tri consists of a 1500m swim, 24 mile or 40km bike ride, and a 6.2mi or 10km run. In your hierarchy of triathlons, the Olympic distance race is often seen as a benchmark as it’s what the Olympians race. In years past I’d raced “sprint” triathlons of various combinations of distances: usually consisting of a swim up to half a mile, a bike ride between 8-17 miles, and a 5km/3.1mi run. These races were quick, fast, and fun. At my peak in 2014 I could race two a weekend, although that wasn’t the norm. Now I just wanted to race one. The race I chose for my comeback was the San Luis Obispo Triathlon to be held in late July.

There are a few reasons why I chose San Luis Obispo (or SLO) Tri for my comeback. First the race didn’t involve an open water swim (OWS), but rather a half mile pool swim. I swam in the Pacific’s frigid waters a couple of times; I wanted to build to racing an OWS. SLO provided that chance. Second while my wife and I knew Monterey and the Bay area, we never explored south to San Luis Obispo, Morro Bay, or that portion of the coast. I jumped on Vacation Rentals By Owner and found a cozy place in Morro Bay, 20 miles outside of SLO for race weekend. Along with this, I wanted to eye Morro Bay and its environs as I anticipate racing the Morro Bay Olympic triathlon in November. Why not check the place out? 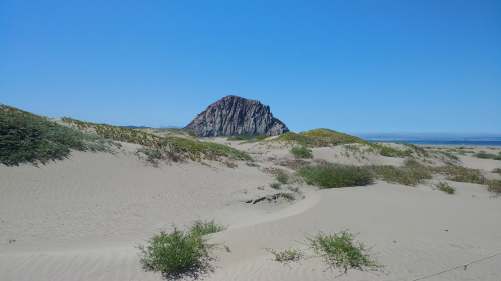 Finally, the race appealed to me with its motto: “completion not competition” which hit close to home. Once upon a time I raced a lot, doing well as an age group athlete. Did I still have it in me? SLO would be my chance to find out.

Before getting to SLO, however, I embarked on a trail run to inaugurate my return to triathlon racing: the Coastal Recreation Trail between Lover’s Point and Asilomar. In all of the Monterey peninsula, I doubt you will find a more beautiful trail to explore than the Coastal Rec trail in Pacific Grove. This combination of packed and loose sand single track extends between Lover’s Point and Asilomar State Park, for a distance of about 3 miles.

When the wildflowers bloom, the sun shining, and the waves breaking, the power of its beauty is immense. When I first moved to Monterey in 2006 this was the first trail I ran and instantly fell in love. Shortly after running this route, I knew I wanted to run the Big Sur marathon; now I looked to this trail again before re-starting my racing efforts. The day I chose while overcast still harbored every bit of natural beauty. I started off from Lover’s Point along the single track bouncing across the packed sand and around tourists as I ventured along the coast. Below me I could see sea lions laying and barking in the surf. Further along the route visitors park to watch the sea and take pictures. It isn’t uncommon to see whales along this stretch as they make their yearly migration up and down the Pacific coast. When the tide is low you’ll see explorers seek out the rich tidal pools that emerge as the ocean retreats. 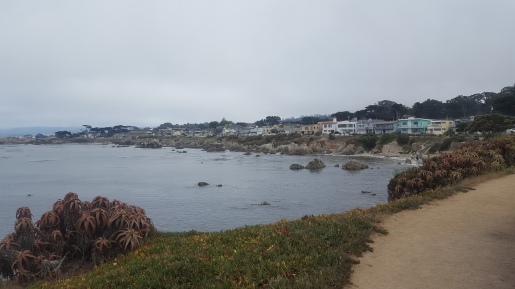 Looking back towards Lover’s Point

From this portion of trail you can extend either out to Pebble Beach to the south or back north into Monterey. This is simply my favorite running trail on the Monterey peninsula. I used this run to focus myself mentally for SLO and the races to follow. As I meandered down the trail, I felt a certain ease and comfortableness with myself once again. It was like coming home: the familiarity of the situation about to be undertaken re-entered my mind. I finished back at Lover’s Point recharged and ready. The next day we embarked.

The time spent before the race was low key, but fulfilling. The drive down was unremarkable: a straight shot down the 101 to San Luis Obispo followed by check in at the race site. Thirty minutes more and we arrived in beautiful to our rental in Morro Bay. The next morning I got up and did a short shakedown of a 10 mile ride followed by a mile long run around the neighborhood. It all felt great! Throughout the workout the iconic Morro Bay rock appeared and disappeared in the heavy fog that rolled in from the ocean. After some mandatory beach time in the afternoon, I ventured down the street to a brewery I noticed during my ride & run that morning: Three Stacks and a Rock Brewing Company.

Located in a small shopping complex just off the frontage road for Highway 1, Three Stacks and a Rock offered a warm and welcoming atmosphere in its cozy environs. I tried two samplers and walked away satisfied with both. 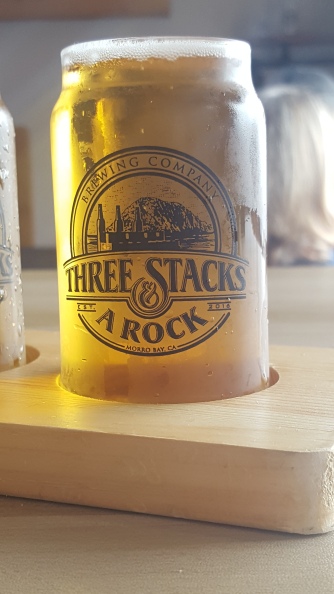 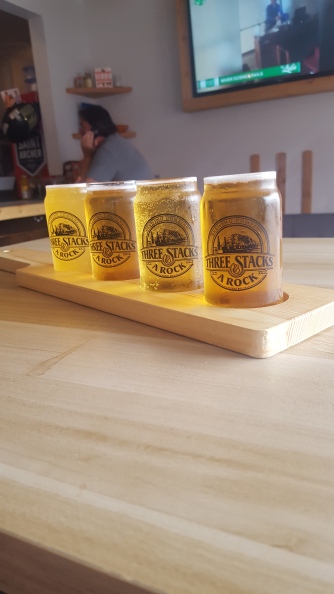 All of their beers were great! The Highway 1 IPA though is a must! This brewing company offered just the carbo load I needed to be ready for my race. As I sampled their finest brews, I thought of how far I’d come over the last three years. From being told I wouldn’t run again to standing back at the starting line, the journey was long. Now the day before the race, looking back, I knew I was ready. It was time to race again.