Spoiler alert—this isn’t about rapid manatees, it is however, about a weekend spent in Manatee County, Florida while on a recent work trip to Tampa. (If you want to see a great video of a manatee attack check out a clip here.) Going in the weekend had all the making of something epic. Going out, well, that’s another story. So grab a cold one, sit back, and prepare yourself.

It all started with a simple idea: I wanted to throw a promotion party for two of my Soldiers in the Tampa area who were recently selected for the next higher rank. I’ve got incredible Soldiers, but these were a couple of real rock stars, not to mention I’ve got a few others scattered in the area. Not only that, but about an hour south of Tampa, my mom has a vacation cottage she’s been claiming that she’ll retire to (for like 5 years), but which is usually open most of the year (unless she’s actually down here and not hanging somewhere like Dubrovnik). I checked with my mom, she wasn’t going to be there (she’s actually really in Dubrovnik on a cruise), and decided let’s do this. 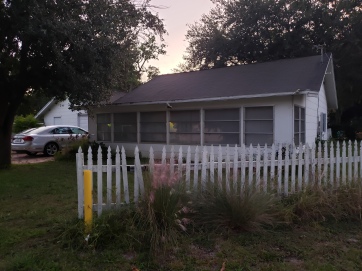 Mom’s house (AKA the Crash Pad)

Now in the back of my mind, I’ll admit that flashbacks of one or two high school parties came flooding back to mind—but why not? We’re adults—let’s chill out, relax, unwind, and have a great time. Maybe it would become the epic raging kegger of yesteryear…what would be would be, right?

No plan survives initial contact they always say in the Army, and this one began to unravel as soon as I arrived in Tampa. Coming from meetings in DC, the promotion orders for my guys weren’t ready. No promotion this time. Mistake #1. Then at the rental car desk at Tampa International more bad news. The rental guy congratulating me on arriving early. “Why?” I inquired.

“You didn’t get the news? Yeah, the airport will probably be closed by this evening—the storm coming in: winds, thunderstorms and a good chance of tornadoes,” he replied.

I checked the weather app on my phone. Sure enough, Tropical Storm Nestor’s effects would be felt this far south. What those effects would be was still to be determined. The window of course for Nestor’s incursion: from late Friday through Saturday afternoon. So I had my meetings in Tampa, visited my troops, and left the status of the party to be determined (TBD). Driving down in the late afternoon through St. Petersburg, the early stages of the storm started to roll in off the Gulf: winds picking up and a sprinkle coming down. By the time I arrived in Bradenton, a steady rain fell. I opened up my mom’s house and the empty smell and vibe was an instant time travel to every child’s memories of their grandparents’ house: a dampness in the air, cobwebs in the corners, thin layers of dust on shelves. I found the circuit breaker, switched the power on, and felt the house and (more importantly) the air conditioner rumble to life. By 8pm I could feel Nestor’s presence as the wind and rain howled outside. A trip to the local Publix for some essentials, followed by a quick dash for a pizza and beer, and I was set for the night.

Saturday morning I awoke to the incessant rain falling. Checking my phone, it looked like there would be a break in the storm between the late morning and mid-afternoon, but I wasn’t going to take any chances. I called off the party on Saturday. My head hung low. A sense of defeat wafted in the air. I’d have a smaller get together on Sunday, but my delusions of high school parties from the early 90s were dashed. Instead I made a split decision—I’d brave the elements and get a run in. The only question was where.

A little bit of research and I’d found my spot: the Robinson Preserve on the west side of Bradenton. Not knowing what to expect, I drove across town arriving around noon. Checking maps, I cobbled together my path, a 3ish mile loop around the northern part of the preserve. 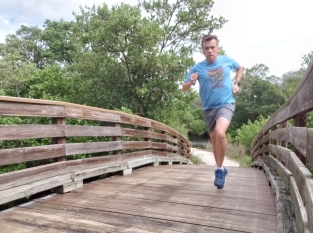 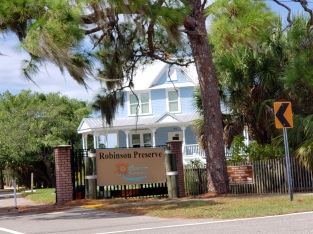 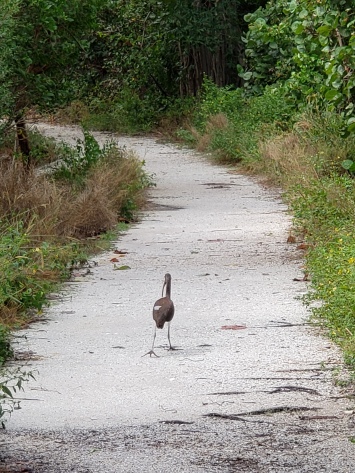 There also looked to be a half mile fingertip I might want to add for another mile or so. Nothing left to do but tighten up my shoes, grab my phone and keys, and head out. Initially it was a combination of paved trail, then switching to crushed limestone, as I made my way around the preserve. About a quarter mile in, I ventured up a lookout in the middle of a small lake. 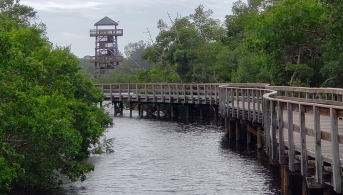 The lookout provided commanding views of the local area. Heading down, now the trail became a series of raised wooden paths over the streams leading out from the sea. Eventually, I reached the northwest corner of the preserve, a t-intersection where I had to decide to play it safe or take a chance and run the fingertip out. That decision making lasted all of about a second. I turned west and headed into what I thought would be more of the same. Mistake #3.

The 0.6mile trail out to the tip of the preserve started out gentle enough—more of the same from the main part of park, only more narrow in spots. Quickly it changed into pits of mud and low hanging mangroves. I hopped, skipped, and jumped my way across as many as I could, knowing full well what a wrong step would do. Finally I made it to the end and was greeted with a spectacular view over the water. I felt confident how well the run was going, so I turned and headed back. 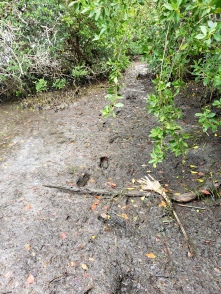 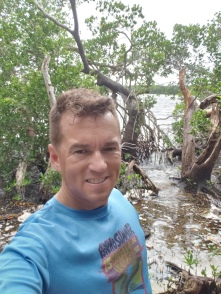 Not more than 2 minutes later I attempted to hop over a spot of mud when my foot went completely in. I quickly reacted to get my balance with the other foot but my momentum brought my constricted foot forward and out of my shoe. Somehow I managed to maintain my balance on one foot, phone in one hand, and reach down to rescue my submerged other shoe. I didn’t get any pictures. I wasn’t going to press my luck. I squeezed my foot back into the shoe, ignoring the extra inch of mud that now inhabited the toe, and ventured back. The next two miles bordered on miserable between the mud covering my shoes, and now the sun emerging and beating down all to the tune of incessant humidity. Still the Robinson Preserve delivered a great trail run. Branches to some of the main trails would have allowed me to finish probably another 3 or 4 miles. As it was when I returned to my car I was 4.5 miles for the day—but more importantly I had my shoe. Manatee struck, but I survived. If you’re in the area, I highly recommend Robinson Preserve to check out either on a run or hike. It’s a fantastic place on the edge of Bradenton. 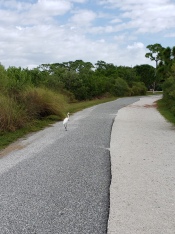 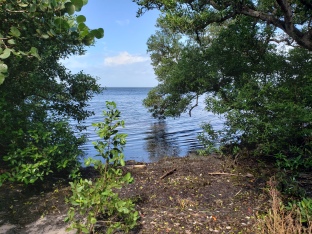 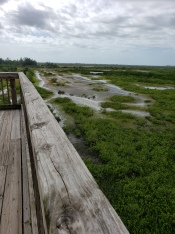 Following the early afternoon’s adventure, I went home, cleaned up, and ran a few errands before pairing my run with a great local brewery: Motorworks Brewing also in Bradenton. Having done my research, I knew that this last weekend was going to be there Celtoberfest—think a combination of kilts and lederhosen…and yes, I mean at the same time. 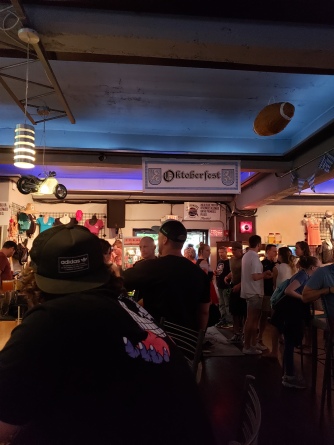 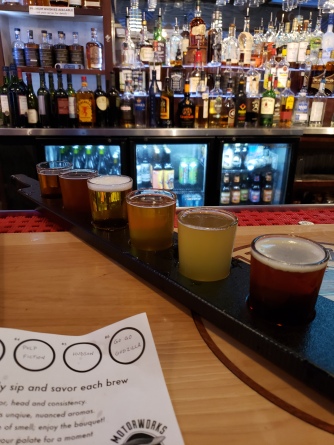 Motorworks didn’t disappoint with a great selection of all kinds of beers: from your variety of IPAs, to more complex saissons and my favorite, hefeweizens. I ordered up a sampler of 6 and sat back to watch the Celtoberfest around me. Among the favorites from these included:

Oktoberfest 2019: A wonderful marzen style ale, made perfect for the season. Not overly heavy, this beer sat well on the palate.

Pumpkin Ale: If it’s autumn it’s pumpkin time. Motorworks not wanting to be left out crafted their own pumpkin ale, and it was a home run. Can you say pumpkin pie in a pint glass? All the wonderful flavors of a pumpkin ale with quite a punch at 7% abv.

ThaIPA: described as a coconut & Thai Chili IPA, this beer packed quite the punch! Initially going down smooth, the chili hit with its spice hit you as it went down. Definitely a winner!

Hudson Hefeweizen: The Hudson is your traditional unfiltered German-style wheat beer. Hints of fruit and spices dance on your taste buds with every sip. I was a big fan. This was my favorite beer of the night. 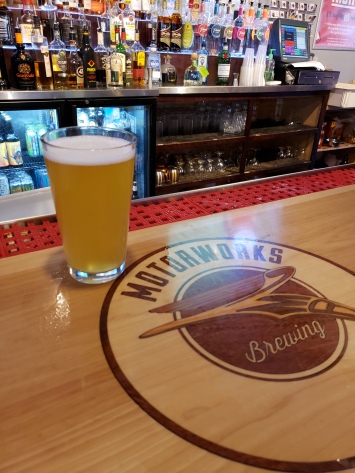 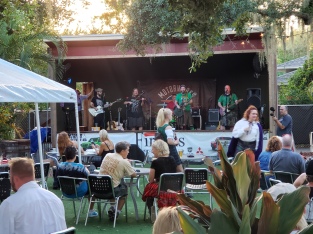 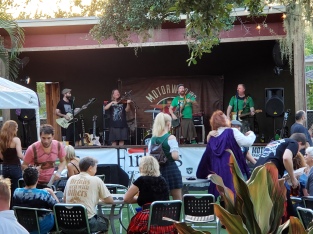 Besides the great beers and the festive atmosphere around me, they also had German food available for purchase. What better way to sample beers than with a schnitzel sandwich? The sandwich paired perfectly with all the beers. I contemplated ordering a second one. In the end though, I ordered a pint of the Hudson, and sat outside listening to live music play away into the evening.

Not wanting to press my luck too much in Manatee County, I called it a night after my Hudson and headed home. It had been quite the adventure and I was ready for a good night of sleep. I’d survived what Manatee threw at me, between the storm, the mud, the heat, and the beers, I saw the score as Dave- 3, Manatee- 0. I was a happy camper. The next day I threw my epic raging throw down of a party with a total of 9 people. Nothing got broken either! (Seriously mom—if you are reading this, everything was still together in one piece when I left!). I must be getting old. Whatever the case, it was good to see my Soldiers and thank them for all they’ve done for us. Who knows—maybe I can come back and throw another. Only time will tell.

Besides more adventures awaited me in the days ahead. I was heading back to west next, but that’s for another story.

See you on the trails!